The National Election Committee yesterday said that the national election was a resounding success, with 82.17 percent of registered voters turning out to cast ballots to elect the 125-seat National Assembly.

Speaking at a press conference after all polling stations closed at 3pm, NEC chairman Sik Bun Hok said the election was a success with 22,967 polling stations across the country reporting a smooth election.

“This is a success. I offer this accurate and transparent preliminary result for all relevant parties as information that can be verified from now until the official results,” Mr Bun Hok said. 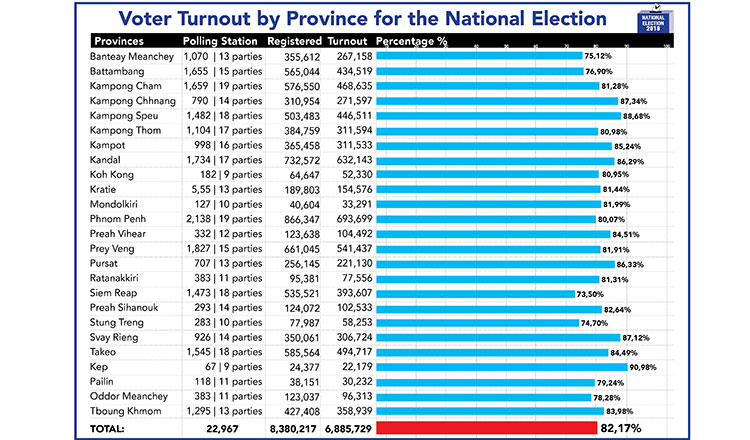 The NEC is slated to announce its preliminary election results on August 11 and the official ones on September 11 after all complaints from political parties are solved, he said.

“No violence was reported,” he said. “It clearly shows that Cambodian voters have become more mature when compared to the previous elections. They understand their obligation and their rights.”

As of press time yesterday evening, unofficial results showed that the CPP won more than 110 seats in the National Assembly, while Funcinpec and the LDP were the only other two parties to secure those remaining.

“The turnout is higher compared to the 2013 election. Both national and international observers assisted well and they witnessed the whole process,” Mr Sovannarom said. “So I think this election is clearly proved to be free, fair and transparent.”

Phnom Penh police chief General Chuon Sovann said that about 80,000 forces were deployed across the capital to ensure safety during the polling day.

“I think the electoral situation in 2018 was much better than the previous one in 2013, in which violence occurred at some polling stations,” he said. “Many police officers were deployed to ensure security.”

Prime Minister Hun Sen and his wife Bun Rany cast their ballots in Kandal province’s Takhmao city early yesterday morning, but he refused to talk to the media at the polling station.

Mahbub Alam Shah, an observer from Bangladesh who was at the polling station in Takhmao city, said that a safe and peaceful environment ensured no violence occurred.

“It’s amazing that a country like Cambodia can be very organised with all those political parties. I’m not trying to be pro or against. We would tell the truth. I saw it with my own eyes,” he said.

Cheang Ratanak, a 67-year-old voter, said that he voted to support democracy.

“I want all lawmakers to serve the people in the country. There were 20 political parties, so I had a choice to vote for a true leader,” Mr Ratanak said. “I think this election was free and fair.”

Chan Chamrong, a 42-year-old teacher, said he voted for the CPP because he wanted the Kingdom to continue enjoying peace and further development.

“It’s been five mandates for the CPP but I still vote for it because I think it has done good for the country and I do not think other parties will be better than it,” he said.

Mao Monika, another voter who cast her ballot in Takhmao city, said that she felt confident that she chose the right leader. 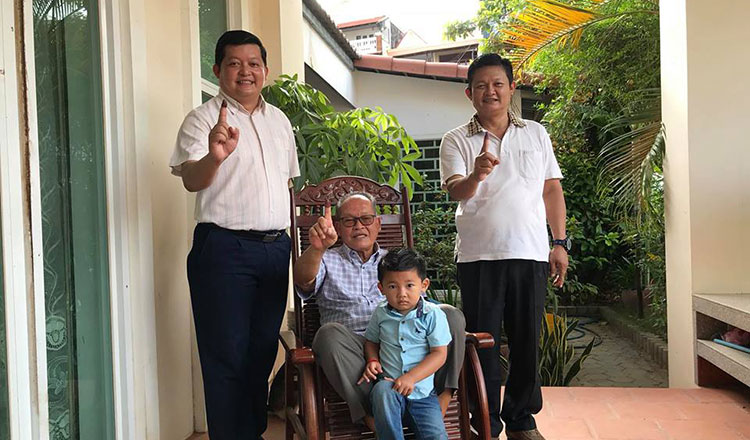 “I hope the leader that I chose will help the people,” Ms Monika said. “Voting is very important and this is the second time for me to vote. Before, there was a strong competitor, the CNRP, but now we don’t have it any more. However, the election process must move on.”

In a statement released yesterday, the CPP said that the high voter turnout clearly showed that Cambodian people’s rights to participate in politics and enjoy multi-party democracy remains robust.

“The CPP firmly believes that multi-party democracy is the foundation of sustainable peace and development,” it said. “We congratulate Cambodians who have voted today to maintain a multi-party system in Cambodia.”

The CPP, which is expected to win the election, also thanked national and international observers for their monitoring.

Mr Hun Sen posted a message on his Facebook page yesterday, saying that voter turnout was high because people understood the democratic process and exercised their rights.

“Thank you very much, brothers, sisters, nephews and nieces, for voting in the parliamentary election for any party you like,” Mr Hun Sen said.

“For Cambodian people, unable to make a real choice because of the absence of the CNRP, the result of this false election conducted in a climate of fear is a betrayal of the popular will,” Mr Rainsy said. 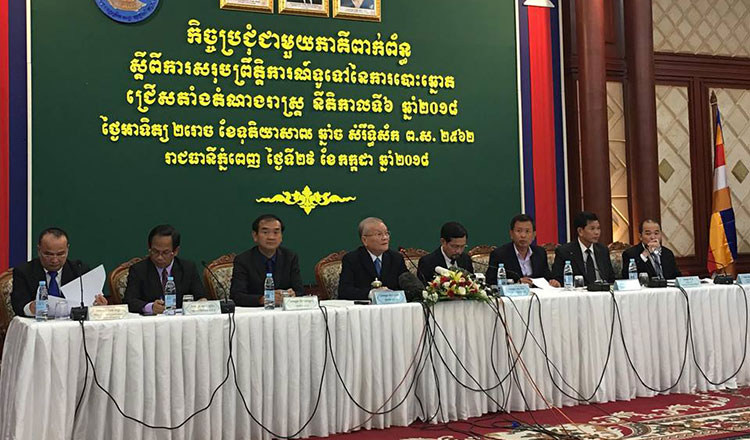 In 2013, more than three million out of 6.6 million valid votes were cast for the CNRP, leaving it with 55 seats compared to the 68 held by the ruling CPP after about 69 percent of voters cast ballots, marking the lowest turnout in history.