Polling stations nationwide have closed as of 3pm, with the National Election Committee recording a higher voter turnout this when compared to the 2013 election.

Information Minister Khieu Kanharith said that unofficial results show that 80.49 percent of voters have cast ballots as of 3pm, when polling stations closed.

According to the NEC, which will provide official results this evening, 70.41 percent had cast ballots as of 1pm, two hours before polling stations closed.

“It has been a very smooth process today,” NEC spokesman Dim Sovannarom said.

General Hun Manet, deputy commander of RCAF who voted with his wife in Phnom Penh, said that the security situation during the polling was safe.

“It was open and people were free to exercise their rights and their wills,” he said. “Those who were registered were able to cast votes freely for their leaders.”

Mao Monika, 28, a citizen who cast her ballot in Takhmao town in Kandal province, said that she felt confident in the poll.

“I am confident about this election,” she said. “I hope the leader that I am choosing will help the people.”

“Voting is very important and this is the second time I came to vote,” she added. “Before, there was a strong competitor in the CNRP, but this time we don’t have them; however, the election process must go on.”

Keo Sinoeun, 35, another voter, said that he hopes the ruling CPP maintains leadership of the country.

“We need a leader who can make the country stable and develop it,” he said. “We want peace and no war.” 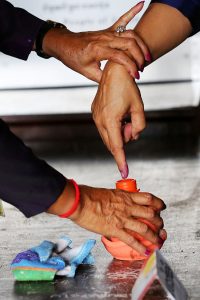