About 60 percent of registered voters across the country have turned out to vote in the national election thus far, according to the National Election Committee.

This afternoon, the NEC released a breakdown of ballots cast ahead of the deadline of 3pm to vote, which showed 58.80 percent of voters have made it to the polls.

Reached by phone, NEC spokesman Dim Sovannarom said that the situation at all polling stations has been smooth.

“People understand about their rights, they came to vote, and now as of 1pm across the country, more than 60 percent of voters turned out to vote,” he said. “It’s been peaceful, the situation at all polling stations is going smoothly.” 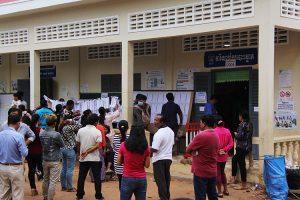 Early in the morning, Prime Minister Hun Sen and his wife cast their ballots in Kandal province’s Takhmao city, witnessed by dozens of national and international observers.

Mr Hun Sen and his wife Bun Rany took about three minutes to vote at the polling station.

“[The law] doesn’t allow me to speak here. Do not ask me question here [at the polling station]. We have to respect the law,” Mr Hun Sen said.

The NEC said there are 9.88 million eligible voters this year, or 84.8 percent of those aged 18 and over. 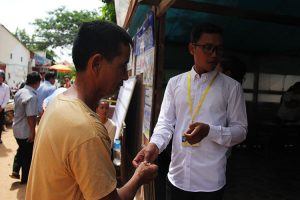