Prime Minister Hun Sen and his wife casted their ballots on Sunday morning in Kandal province’s Takhmao city and witnessed by dozens of national and international observers.

Mr Hun Sen and his wife Bun Rany took about three minutes to vote at the polling station. 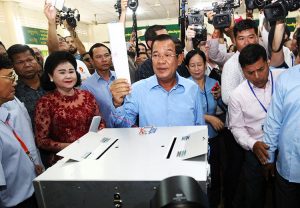 Mr Hun Sen did not talk to the media at the polling station.

“[The law] doesn’t allow me to speak here. Do not ask me question here [at the polling station]. We have to respect the law,” he said.

“We can see here a lot of voters come to fulfill their obligations as citizens. Both national and international observers have witnessed the process which I think it is free and fair,” Mr Sovannarom said.

Mahbub Alam Shah, an observer from Bangladesh, said that safe and peaceful environment were ensured and no violence occurred.

“It’s amazing that a country like Cambodia can be very organized with all those political parties. I’m not trying to be pro or against. We would tell the truth. I saw it on my own eyes,” he said.

Cheang Ratanak, 67 year-old voter, said that he voted because he wanted democracy and the country to further develop.

“I want all lawmakers to serve the people in the country. There are 20 political parties, so I have choice to vote for a true leader. I hope that people come to vote because it is an obligation. I think that this election will be free and fair,” Mr Ratanak said.