Off the 15 parties battling for seats in Battambang province only the Cambodian People’s Party (CPP) held a big one on the last day of electoral campaigning.  Two parties held smaller ones, while other parties focused their attention elsewhere.

Naga Peace Park in Battambang city was the CPP’s venue.  Some 20,000 party members and supporters watched a live broadcast of the Prime Minister’s speech from Phnom Penh.

After the PM’s speech Chan Sophal, provincial CPP head, spoke to praise the current peace and development, and encourage people to vote.  “Thanks to the peace and stability brought about by the … [CPP] the country has developed in all areas and lifted a large number of people out of the poverty.  Peace is very important for the country’s development and to achieve that, we need to vote for the … [CPP].” He expects the CPP to do well in the election, and strongly believes that the National Election will not be marred by irregularities or violence. 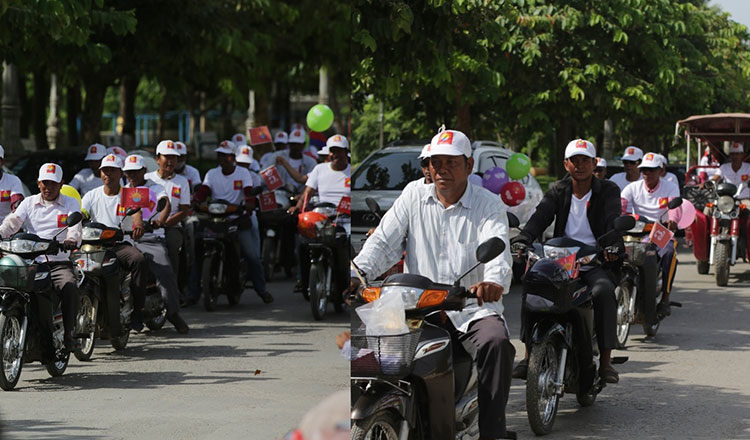 The crowd then dispersed to hold gatherings in their individual districts and communes.

The Khmer Will Party’s head, Kong Monika, said that “Voting or not is the citizens’ right, but we … are not interested in this fact. More important is that we … let the people better understand our party.  The majority of our members are ex- CNRP.”

Chheang Phally, of the Cambodian Youth Party, speaking to a small congregation – its main focus is on Tbong Khmum province – gave no projection of how many seats the party might get.

Mok Chansopheap (Battambang Provincial Election Committee) said that the League for Democracy Party, the Dharmacracy Party, and  the Khmer United Party decided not to gather in the city.