Home - CPP set to extend its grip on power

CPP set to extend its grip on power

With 19 other contenders on Sunday’s ballot, the ruling CPP looks set to dominate the election.

The national election on Sunday is expected to be a resounding victory for the ruling CPP, which is now in power and is seemingly running against not well prepared opposition parties which emerged after the dissolution of the CNRP.

Without the opposition, the election is reportedly said to be, by some, to be one of the most controversial since the first general election was brokered by the United Nations Transitional Authority in Cambodia in 1993 as critics cry foul and slam it for not being free and fair.

Some local civil society groups, including election watchdogs as Comfrel and Nicfec, have opted not to observe the election.

“Without a strong competitor, the CPP will win for sure as this election just has one player in the ring,” he added.

Korn Savang, a monitoring coordinator with Comfrel, said that none of the other 19 parties taking part in the poll can challenge the CPP.

“No party is strong enough to draw support from ex-CNRP supporters,” he said. “I cannot even make a confident judgement if voting will be a free and fair. A multiparty is not automatically fair.”

Political analyst Hang Vitou said the other 19 parties contesting the election lack experience, capacity and human resources, making it hard for them to compete with the CPP.

“Only two parties, the CPP and the CNRP, won the 2013 election,” he said. “Now with one out of the picture, the question is: Were a majority of the 19 political parties participating in this election just created as façade of democracy?”

“I think the CPP will not gain all the seats,” he added. “I believe that the CPP will win at least 95 to 120 seats and Cambodia will not become a one-party state.”

However, detractors argue that the Kingdom has steadily travelled down the path of becoming a single-party state since the Untac election in 1993.

Mr Sokuntheamy said that in 1993, Untac ensured a free and fair election.

Back then, the royalist Funcinpec party took 58 seats and the CPP 51 seats as the first runner-up after 89.56 percent of 5.7 million registered voters cast ballots.

The CPP refused to accept the results, and a political deal was made to form a coalition government with Prince Norodom Ranariddh as first prime minister and Mr Hun Sen as second prime minister.

But the coalition government faltered as relations worsened between the two leaders, resulting in fierce street battles in July 1997 in Phnom Penh, where troops loyal to Mr Hun Sen defeated soldiers loyal to Prince Ranariddh, unseating him as first prime minister.

Since then, Funcinpec has become weaker and weaker as Mr Hun Sen has consolidated power and breakaway parties from its demise emerged.

Nhek Bun Chhay, leader of Khmer National United Party, left Funcinpec in 2016 and was reportedly dissatisfied with the new structure of the old party and the leadership of Prince Ranariddh.

Mr Bun Chhay claimed he formed the KNUP to contest the election this year after he saw that previous elections were not fully recognised by international communities and no party was able to challenge the CPP.

“Since 1998, Cambodia has organised elections by itself and I noticed they did not proceed as smoothly as 1993,” he said. “Numerous irregularities occurred. So, I hope that my party will be able to gain a couple of votes in this election to ensure democracy in Cambodia.”

With Funcinpec out of the limelight, a new force emerged prior to the 2013 election as the Sam Rainsy Party merged with the Human Rights Party to become the CNRP.

Together, the two parties held just 29 seats in the National Assembly, with 26 for the SRP led by Sam Rainsy and three for the HRP led by Kem Sokha.

In 2013, more than three million out of 6.6 million valid votes were cast for the CNRP, leaving it with 55 seats compared to the 68 held by the ruling CPP after 68.5 percent of voters cast ballots, marking the lowest turnout in history.

The CNRP went on to make inroads into the CPP during last year’s commune elections, after which moves made by the government led to critics crying foul and arguing that this year’s election will not be free or fair.

The first move was the arrest of Mr Sokha in September on treason charges, followed by the Supreme Court dissolving the CNRP and barring118 of its senior members from politics for five years.

The ruling CPP maintains that Mr Sokha and his party are traitors over allegations of colluding with the United States to overthrow the government through a colour revolution, a scheme that had to be stopped.

Mr Sokha’s jailing, the party’s dissolution, and subsequent distribution of its assembly seats and commune level positions were all carried out according to the law, the CPP said.

But the moves have left a shadow of doubt and controversy over this year’s election as the United Nations, European Union and the US continue to suggest that the political atmosphere is a failing democracy and the poll illegitmate.

However, allies like China, Russia and Japan have continued to offer full support for the election process and the moves made by the ruling CPP, noting that the sovereign Kingdom must be left to implement its laws.

With the CNRP out of the picture, the other 19 parties took advantage and are vying for votes from the former CNRP supporters as the election pushes forward.

The Khmer Will Party, which claims to be the “soul of the CNRP”, is fielding dozens of former CNRP members for office, making up 60 percent of its candidates.

“I am sure that the Khmer Will Party will be able to provide a new choice for the supporters of the former CNRP,” Mr Monika said. “For those who want positive change and also want an end to political crises, they can support us because we will carry out all the CNRP’s policies.”

Similarly, the fledgling Grassroots Democratic Party also claims that those who voted for the CNRP in the 2013 election should vote for the GDP as a new choice for change.

Yang Saing Koma, the GDP’s prime ministerial candidate, said that election boycott calls being made by former CNRP members will not affect turnout this year, adding that his party will scoop up the opposition vote.

“I am confident that the GDP will replace the now-dissolved CNRP and that more than 80 percent of the eligible voters will turn out,” he said. “Rainsy will not win this game between him and Hun Sen about voter turnout.”

“It’s impossible that Rainsy’s boycott calls will affect voters because the GDP has proven it is a new choice for them,” he added.

Mr Rainsy has been pushing a ‘clean finger campaign’, urging voters to abstain from the poll which he has labelled illegitimate due to the CNRP being banned, an opinion dismissed by the ruling CPP as delusional and by the National Election Committee, which maintains that the election represents true democracy.

NEC spokesman Hang Puthea said the election will be free, fair and transparent, regardless of the dissolved party’s actions.

Mr Puthea noted that 21,671 voters were deleted from the voter list because of duplicated names, deaths and address changes.

“Voters have a broad understanding now compared to 1993, and technology has paved the way for accurate voter lists, including how to store data with security codes,” he said. “I think the NEC will process a free and fair election.” 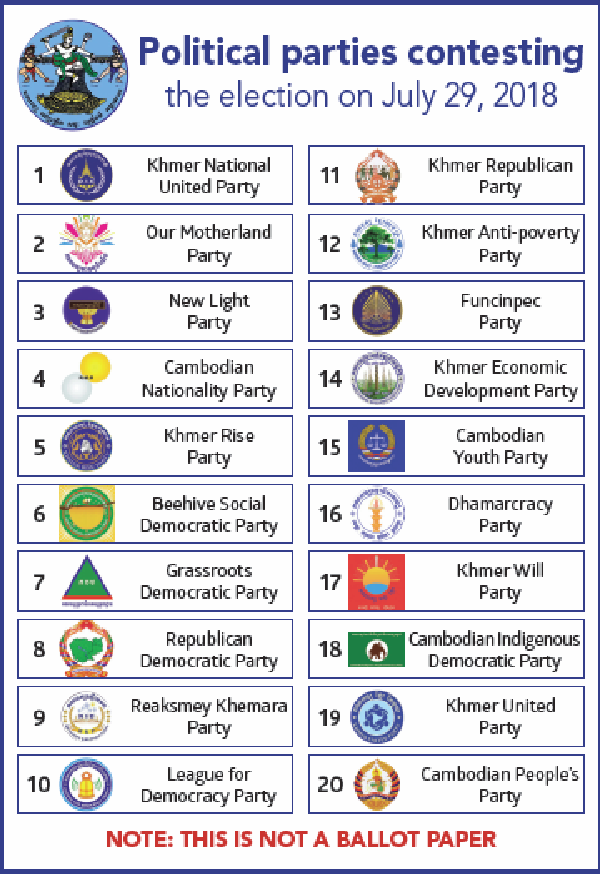 Mr Puthea said that Cambodia is an independent nation capable of holding its elections without outside help, adding that criticism from the US and EU that the election is not free or fair falls flat when support from others nations continues.

Mr Hun Sen has also addressed the criticism surrounding the election, dismissing claims that it will not be free or fair in the wake of the CNRP’s dissolution while also noting that the Kingdom does not need recognition from anyone.

“Cambodia is carrying out democracy because small and big political parties have the right and opportunity to take part in a free and fair election,” he said. “The National Election Committee (NEC) will announce the final results … there will be no need for anybody to recognise it or not, we don’t need it.”