Home - The ‘helicopter’ in the stomach

The ‘helicopter’ in the stomach

When I was a little child, I saw my dad vomiting blood and blood clots several times. He had barium meal x-ray imaging done that revealed an ulcer in his stomach. The surgeon offered him surgery to remove three-quarters of his stomach or face the risk of death from an uncontrolled bleeding ulcer. Such surgery known as Billroth II gastrectomy was a common treatment for stomach ulcer at that time. Nowadays, however, this life-saving surgery is obsolete and hardly heard of.

In 1983, Helicobacter pylori (H. Pylori) was successfully isolated from the stomach by Dr. Robin Warren and Dr. Barry Marshall. The breakthrough discovery of these two great physicians revolutionised the treatment of stomach ulcer from the surgeon’s knife to pills. Many lives were saved since then. Twenty-two years later, these physicians fwere deservingly awarded the Nobel Prize for Medicine in 2005.

Perhaps I should share a little more about the story of the discovery of this notorious bacterium. 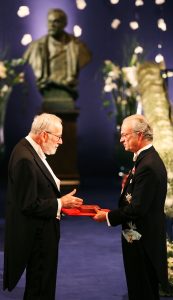 Until 1983, researchers who repeatedly saw such bacteria in the stomach would pass them off as dead bacteria on the logical presumption that no bacteria could live in the human stomach that is intermittently flushed with gastric juice containing strong hydrochloric acid. Thus, H. Pylori managed to elude discovery until that year when Dr. Warren, a clinical pathologist in Western Australia who worked with Dr. Marshall, successfully proved that those bacteria found in the stomach were indeed alive and thriving well. Dr. Marshall actually drank a homebrewed culture of H. pylori to prove that the bacteria causes gastritis.

H. pylori is a nasty bacterium that looks like a microscopic helicopter in the human stomach. It is the only bacterium that survives the real acid test in the human stomach that produces gastric juice containing strong hydrochloric acid with pH of 1 to 2. No other bacteria can survive in such adverse environment of acidity that is strong enough to melt bones and stones. The World Health Organisation (WHO) classified this bacteria as a Class 1 cancer-causing bacteria and the No.1 cause of stomach ulcer.

H. pylori is a bacterium that colonises the guts of approximately 50 percent of the world’s population. That means every one out of two of any of us has H. Pylori in our stomach. Colonisation of H. pylori in the stomach may lead to recurrent stomach infection and inflammation (gastritis) that significantly increases the risk of developing stomach ulcer or cancer. Infection with H. pylori is the strongest known risk factor for stomach cancer, which is the second leading cause of cancer-related deaths worldwide.

Genetic studies indicate that H. Pylori have probably coexisted with humans for 58,000 years, yet it is still not exactly known how it spread. Many believe that it is spread from one’s mouth to another. During my time as a little boy, I had personally witnessed the common practice of Chinese mothers chewing up the rice in their mouth before offering it to their babies. The bacteria could also be transferred from feces to mouth when one fails to wash one’s hands after using the toilet. Other possibilities include the spread through contaminated water or food.

Most people with H. Pylori do not have any symptoms. Others may have one or more of the following symptoms: excessive burping, feeling bloated, nausea, heartburn, loss of appetite or unexplained loss of weight. Generally, children have higher risk of developing H. Pylori infection because of their relatively poorer personal hygiene. You are advised to consult your family doctor if you have any of the symptoms mentioned above. The presence of H. Pylori can be detected using breath, blood, stool or tissue specimen taken from the stomach.

Generally about 10 percent of those infected with H. Pylori could develop stomach ulcer and 1 to 3 percent of them could develop stomach cancer. Such risks are significantly high. With the seriousness of the diseases and their high fatal consequence, all efforts should be made to educate the public about these diseases. With increasing awareness, it is hoped that more people will take the initiative to screen and destroy this notorious ‘helicopters’ in their stomach.

Truly, prevention is better than cure especially for diseases that are largely preventable. Preventive medicine is always cheaper and better.

My next column will be on ‘Many people prefer to die’.