There is much more to North Korea than meets the eye. T. Mohan and Raquel R. Bacay tell why.

What? You are actually visiting North Korea? Is it safe? Are people even allowed to travel there? Is it not a police state of sorts?

These were some of the questions we got as we made known to a close circle of colleagues and friends our visit to North Korea from July 5 to 11.

The easiest part of the visit was obtaining the visas, and the toughest part was finding the most convenient air travel route to get to Pyongyang. 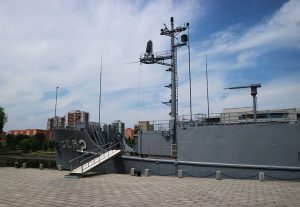 When we finally landed in Pyongyang via an Air China flight which flies the slightly less than two-hour Beijing-Pyongyang route three times a week (Monday, Wednesday and Friday), on the afternoon of July 5, US Secretary of State, Mike Pompeo’s Boeing C-32 Air Force plane (with a VIP interior layout) was on the tarmac – he himself having landed slightly ahead of us. Mr Pompeo’s plane is same with the one used by the US Vice President (as Air Force Two) and the US First Lady.

We had kept an open mind on what to expect and were prepared, well mostly, except for the compulsory customs declaration form which was not handed to us on the flight, other than the landing and exit form (the same for both journeys) and the health declaration.

We soon realised that what we had missed out was the stern customs check where all currencies, electronic gadgets – mobile phones, power banks, external drives, cameras, and computers had to be scrupulously declared. We were soon met by our guide and minder, Mr Ri Kang Jin, secretary-general of the Korea-Cambodia Friendship Association, who whisked us out of the airport and into our car without much of a hassle.

Mr Ri is no stranger to Cambodia and had spent four years in Siem Reap province, managing the Pyongyang restaurant in Siem Reap.

Our stay at the Yanggakdo International Hotel, located on the centre of the Taedong river was pleasant, with ample choice of restaurants and coffee shops, souvenir shops and facilities right down to photo processing and a hair-dressing salon.

We were spoilt with food choices. After dumping our bags, we decided to venture out of the hotel, posing for pictures and walking along the Taedong river. What impressed us the most were the cleanliness of the sprawling city, the disciplined but non hurried way the North Korean people went about their business, absence of armed police or soldiers in the city centre (one would have expected that considering Mike Pompeo was in town), and the neatly kept wide streets and lush greenery, not forgetting the imposing statues and memorials dedicated to the founding father General Kim Il-sung and Marshal Kim Jong-il.

Wherever we went, from the Mangyongdae birthplace of President Kim Il-sung to the Museum of the Fatherland, the Metro, Panmunjom DMZ, silk and shoe factories, children’s hospitals to the two major towers – the Juche Tower and the Arch of Triumph and of course, the incredible acrobatic show, it was hard to believe the propaganda spewed against the DPRK, at least from what we were shown and the places we were taken to.

The people of North Korea were friendly, smiling and even charming. They did not impose nor did they show any disdain to foreigners, including Westerners. 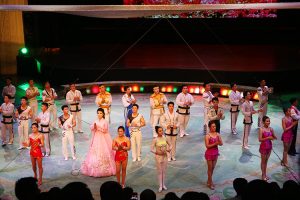 Everything was so organised, including the people’s steady rhythm of walking in the rain, queuing for the trolley car, bus or tram. It showed the determination of the people to lead their lives despite the hardships they had to endure, such as lack of heating during the bitter winter months, crop failures because of lack of fertilisers, etc.

Yes, we were taken on the well-trodden path where most tourists and delegations were being taken to but one can’t help but think that there is much more to North Korea than meets the eye. It is a paradox, in both positive and negative ways. One can’t help but wonder where the country and its patriotic people would be without the wrath of sanctions.

But sanctions have pushed the North Korean people, out of sheer necessity, further towards the spirit of Juche and self-reliance as they brace themselves to overcome the odds with alternatives.

The motto: “A bowl of rice which is half full is better than that which is empty,” keeps them going forward.

HOW TO GET THERE:

Visas:
A DPRK Visa valid for one month but permits a maximum stay of eight days. Approximately $100 for two.

Language
All guides speak fluent English, Chinese and whatever other languages required for tourists and travellers.
Estimated cost
6 nights 7 days tour: Including airfare: $3,000 per person.

Food
A meal will cost an average of $6.00.
Plenty from Korean to Western to Chinese

Important advice
• Declare all electronic products in and out of the country
• All kinds of Wi-Fi and satellite devices are not allowed
• Immigration – friendly and efficient
• Keep an open mind.