The Cambodian Living Arts Theatre – situated at the heart of the capital – is a place where vibrant forms of art by talented artists take the spotlight. And last Saturday, CLA once again showcased an inspirational and wonderful performance as part of its “Exploring Identities” cultural season, which runs from July to September.

As the sun prepared to set and the cold air started to blow, dozens of spectators – locals and foreigners – found their way to the wooden seats of the theatre, all expecting to witness another good show by the CLA. They weren’t disappointed.

The “Buffalo Boy” was a real life story of Seoung Thoeun, a boy who has Cerebral palsy. Thoeun, himself, played the role on the stage. Even with the visible struggle in walking and speaking, Thoeun gracefully moved around and performed his scenes.
He was joined by Lay Not, a deaf man, who portrayed as his friend and as his buffalo. 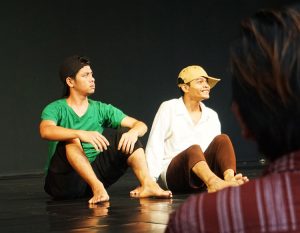 Clad in white long sleeves, brown pants and cap, Thoeun walked into the center, screaming out words the audience didn’t understand. He repeated it several times, but it was only until words were projected into the screen above that we understood Thoeun was saying “This is my story”.
He then played with friend, Not, and danced around like little children enjoying the gift of nature. But Thoeun’s mother, through a recorded voice, sent him out to the field to look after their buffalos.
The next scene showed Thoeun with his favourite buffalo, Heng (still played by Not), who was wearing a golden bell around his neck. Thoeun talked to his buffalo as if it were human. He said that only Heng understood him even when he couldn’t speak clearly. His fondness for his buffalo was evident as he continued to play with him even when he was told by his mother to go back to the house.

Buffalo Boy is a story inspired by Thoeun’s life. Even with his physical condition, the boy aimed to use his talent in dancing and acting to send positivity to Cambodians. Thoeun trained at Epic Arts in Kampot province for two years, enhancing his talent and confidence.
Last Saturday’s performance is a solid proof that Thoeun has won and is continuously winning against Cerebral palsy. There were visible struggles in his part, but his face was full of genuine bliss as he introduced his story to the audience.
During the panel discussion after the Buffalo Boy performance, Thoeun expressed that he did have a hard time rehearsing for the performance. He was tasked to move around the big stage, and dance along with Not. But as determined and optimistic as he is, Thoeun didn’t let his disability hinder him from performing.

Interpreted by Po Sakun, Thoeun said, “As I have never performed before, I therefore have to encounter suffering and pain for a while due to my body condition. However, today I feel excited and so happy seeing many people coming and applauding for me.”
Not, meanwhile, expressed that he’s also not letting his inability to hear to prevent him from reaching his dreams. He shared that he used the floor vibrations to connect to the music.

Not expressed, “I can understand the sound when they turn the volume up. So then I can receive it through the vibration of the stage. Also, performing with Thoeun was a bit hard at the beginning, but then I started to understand more about him and we already have this connection. Performing together now seems natural for us.”
Mr Ou Buntheng, Operations and Tour Manager of Epic Arts, also shared that arts is a powerful tool to gain knowledge and awareness about the society. It is also a way to empower disabled people to get equal chance of being known by wider audience.
“After spending two years at Epic Arts, Theoun had a choice to go back home or to study further. But he chose to stay and refine his skills in dancing. He told me that if he comes back home, no one would understand him and he would feel excluded. So he chose to master his craft.”

After hearing Thoeun’s story, Epic Arts thought that they can use Thoeun to send a clear message to every Cambodian, healthy or disabled, to be happy about life. This gave way to the birth of the story of the Buffalo Boy.
But the project didn’t come as easy as expected. All the artists at Epic Arts do not have professional trainings in theatre performance. It also was an initial concern to have Thoeun and Not, who both have challenging physical conditions, to take the main roles. To strengthen communication among artists and the production, Po Sakun did the sign language for Not and English translations for the foreigners involved.

“All of us want to share the message together that though the two main characters are deaf and physically disabled, nobody should feel excluded or left behind. We tried our best to implement various ways to make this project possible,” said Mr Buntheng.
After Saturday’s show, Mr Buntheng said he felt so proud of the development of Thoeun.
“When he first came to Epic Arts, Thoeun could not even open his mouth to talk with others and didn’t like walking forward. I knew he was full of fears, but today he impressed me so much.”

The two actors and Mr Buntheng are set to fly to the UK next month to finish the Buffalo Boy Project.

You are more than your “Flaws”