French-Cambodian filmmaker and multitalented artist Sok Visal recognises the creativity of Cambodian people in making movies. But he admits that there’s still a long way to go in terms of production, screenplay, editing and promotion of local films. Having had the privilege to get access to wider and bigger resources for filmmaking, Sok Visal wants to raise the bar high. He shares his latest film project and his aspirations with Eileen McCormick. 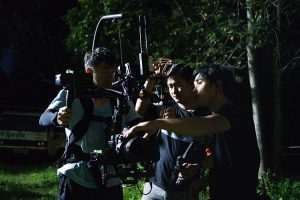 Good Times2: You have a new movie coming up. What is it about?

Sok Visal: Yes, my new film is called “In the Shade”, a psychological horror film. It follows the story of an American-Cambodian guy in his 30s who comes back to Cambodia to deliver a package to his uncle. He then discovers that his uncle has a daughter who’s been locked away in a room for over 10 years. The movie is in Khmer, but the main protagonist speaks English.

Good Times2: How much of a role do you get to play in casting?

Sok Visal: A lot. We don’t have a casting director so I just have a few people to help me get some videos and pictures of people that might be a good fit. I chose who to meet and selected them to be casted in the film. I am very hands-on in every project I work. I am the director, casting director, art director, visual director, etc. From the clothes of the characters to the setting of the movie, I have a say in all of it.

Good Times2: Do your films use a lot of visual effects?

Sok Visal: This upcoming movie is the first time that I will be using a lot of visual effects. I was raised in the 80s so I really am a big fan of Ridley Scott and Stephen King’s horror/supernatural genre of that era, where they had unique ways to use make-up and other special effects. I am really taking my childhood dream of incorporating these themes into my very own movie. 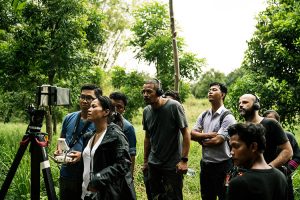 Good Times2: What takes more work: post production or the actual shooting of the film?

Sok Visal: I would say pre-production is the most hectic; post-production is a bit calmer. When I first started, things were quite unplanned. We never actually had a budget for post-production. We just went around trying to find solutions after we finished the shooting. Since then, I have learned the limitations with working on a film like this. I realised that there’s more pre-production planning needed and in each film, I get more serious. This latest film requires a lot of planning because of the visual effects; we’ll be using blue screen mapping and precise timing of music to get the horror feel.

Good Times2: Does Cambodia have its own score composers?

Sok Visal: Cambodia has a lot of talent when it comes to classical music and playing a variety of instruments needed to finalise a score. However, we lack someone who can really lead these musicians. Finding a good conductor who not only composes a musical piece but also develops a strong musical ensemble is a challenge. For this movie, I plan to use traditional Khmer instruments but change the sound to something – like how a violin can slightly be out of tune to give the eerie effect.

Good Times2: What inspired you to create “In The Shade”?

Sok Visal: Cambodian people inspire me a lot. The culture here and the local music and film gives me inspiration to create something good for the locals. I like to take what I see in my everyday life and transform it into an art. With the film, there are messages and things about Cambodia that I can help spread to a global audience.

Good Times2: Is there any difference in making psychological horror films for Cambodian audience and making one for Westerners?

Sok Visal: I don’t think there’s really a difference. I am considerably young in this field as I have worked on three films so far, and I am still learning. Growing up in France, I was used to watching western films so my way of directing is kind of based there. But I don’t think I would make it different from other directors. How a movie is created comes down to the script, and I am still learning how to develop the proper structure and how to make it exciting and good. The only difference would be the context of the story in which the characters live their lives, speak, act, etc. I try my best to stay authentic in that way. 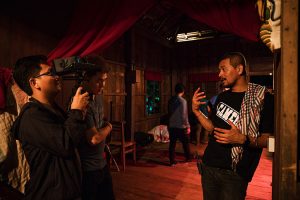 Good Times2: How do you balance out your creative work and your commercial work?

Sok Visal: I can’t say I can balance these things out because I am a bit of a crazy person. I started music first and I did that while I was still working full-time for agencies in the US. It’s only in the past 10 years that I focused on the projects I wanted to do and support myself without having to work for someone else. Right now, most music and films are not really making money so I am not doing film for the money. Everything I have been doing evolves naturally over time which has led to limited financial gains. At some point it will all pay off but I started when the industry was not there and now it’s starting to come into its own. Cambodia is a place where you can be whoever you want to be – a music producer, a film director, whatever.

Good Times2: What do you think about the future of the local film industry?

Sok Visal: I think in the 1960s Cambodia had a really strong film industry. There were lots of movies that people were watching. But the present industry is considerably young. I would say that we started producing high quality films four years ago when Phnom Penh got its first high quality camera. In the past, Cambodia has sort of just copied the works of other countries. But in last few years, we’ve seen more original works. There are more unique works coming out. But at the end of the day, Khmers still prefer to watch Hollywood and Thai movies because local filmmakers have not yet come up with original and interesting concepts. This serves as a challenge, as something that needs to be changed. You will see things come into their own as film directors, including myself, get more experience.

Good Times2: Character stereotypes in Khmer media and films are still prevalent. Can this still be changed?

Sok Visal: We need more layers to the characters to make them more real. I am lucky because I can research scripts in English that helps me to develop more in-depth characters. I feel the reason the stereotypes exist is because the filmmakers only speak Khmer and don’t have access to different resources. It’s difficult for them to learn about how to develop a new character in a script. Having workshops and teachings in Phnom Penh would help. Nowadays, compared to the 80s, equipment and editing have become so cheap that you can shoot a movie and just edit it on your iPhone. There can be no excuses about money. What we lack in here is the understanding that if a movie is bad, it’s because the script is bad. 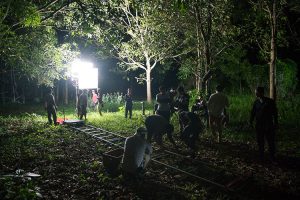 Sok Visal: Everything I do comes from a desire to represent my country. I think we have undergone a lot of isolation because of the war. Look at how much beauty there is all around but unfortunately, Cambodia is only known for corruption, war, Angkor Wat; and I sometimes have to think the media is to be blamed for this negative representation of Cambodia. As a Cambodian artist, I am choosing to focus and talk about the positive things. I do not do this to ignore the negative but to heal the country, we need to move the conversation forward.

Good Times2: How can young film directors get their movies produced?

Sok Visal: Well, there is not much film funds in Cambodia, no academy or something like that. We don’t yet have a production company where you can submit your scripts to and have your movie made. At least, not yet. So it’s hard for sure. The only thing one can do is to take their script and make the film himself. Why wait if you have a good story on hand? Borrow a camera, get some help from your friends and shoot it! You don’t need the best camera and lighting, really. Just keep it basic. It’s something I also learned because when you have a limited budget, you must write a script that reflects that budget – like having just one location. One location can still make a great movie, look at ‘Paranormal Activity’. It’s just really about your motivation, will and your passion to create a good film.