Uncaging, saving tigers in the wild

The last record of tiger population in Cambodia was made in 2007, more than a decade ago. But the poaching and illegal wildlife trades have never stopped.

This became Tiger Beer and World Wide Fund (WWF)’s motivation to push for an effective and highly feasible campaign to support tiger conservation. 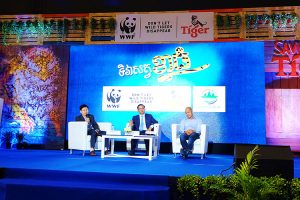 In celebration of the Global Tiger Day, Tiger Beer and WWF launched its partnership with Kenzo, a Paris-based fashion house, to introduce the “Rare Stripes” collection of t-shirts, sweatshirts and jackets that bear different designs of tigers. The designs are conceptualised by four emerging artists from Cambodia, Singapore, Malaysia and the United States.

During the celebration on July 21 at the AEON Mall Sen Sok City, the public had the first look of the “Rare Stripes” during a short fashion show.

But more than utilising fashion as a way to encourage more people, young ones especially, to join in the conservation of tigers in and outside Cambodia, it is the main goal of Tiger Beer and WWF to help double the world’s tiger population by 2022 through a six-year campaign called TX2. 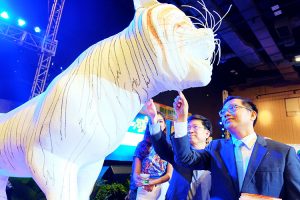 According to latest research, there are only as few as 3,900 tigers left globally, and they face daily threats of poaching and illegal trade.

“Tigers are majestic and charismatic creatures, and are considered as national treasure. This is the right time that we come together including tiger-inspired brands, Tiger Beer and Kenzo, to preserve this globally endangered species. We ask everyone to stand with us to protect tigers,” said Sean Teak, country director of WWF-Cambodia.

Tiger Beer Managing Director Roland Bala, echoed the same advocacy. “We want people to take action to save the wild tigers in Cambodia, our beloved brand icon. With the support from Cambodian government, we are working with our partners to raise global awareness and funds for endangered wild tigers.” 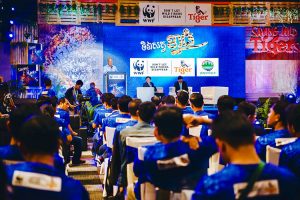 The participation of the youth in this global campaign is very essential, Mr Bala added during the press conference. With this, several young artists were also invited to showcase their works of art – painting, photography, topography and sketches – to shine a spotlight on how the young generation, who probably haven’t seen a real tiger yet, views the threats to these wild creatures.

Mot Kimry, 24, showcased his talent in face painting and photography in his art piece. “I want to help protect the tigers. Some people do not know that this problem exists, they don’t even know that there are tigers in our forest. If the tiger population in the country grows, it will have a great impact on us.”

Aside from the art exhibit, people also enjoyed different photo booths set up in front of tiger-themed graffiti walls, a meditation booth and a 3D art drawing session. There was also a Virtual Reality where people trying the VR gear were tasked to find tigers in a simulated environment. 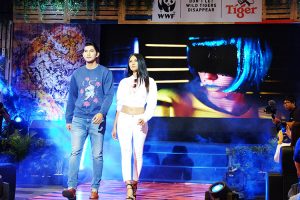 And as a celebration of the fruitful partnership of Tiger Beer, WWF, Kenzo, Ministry of Environment and the general public, Tiger Beer also hosted an indoor concert headlined by Sokhun Kanha, Meas Soksorphea and Chhorn Sovannarch.