During a meeting with Preah Sihanouk provincial authorities at the provincial hall on Monday, a Chinese embassy representative expressed growing security concerns about its citizens committing crimes in the Kingdom.

“A lot of his citizens are coming to do business in Preah Sihanouk and so far there have been some brothers and sisters [Cambodian citizens] that said that the Chinese are here to cause trouble,” Mr Min said. “Mr Jia asked what the embassy could do to help and what we could do to protect their citizens as well.”

He added that mounting concerns were caused by the amount of crime being committed by Chinese citizens in Preah Sihanouk, but noted that the protection of Chinese citizens were also discussed.

“We are the host country, we need to improve security,” Mr Min said. “Chinese embassy representatives said that their people do cause some trouble, and that he does not want to damage China’s reputation. But he also came to learn whether or not we were violating their rights.”

He said that within this month alone, the authorities have jailed about 20 Chinese citizens and deported five for crimes.

A court found the men guilty of confining five Chinese casino gamblers and extorting money from their families in exchange for their release.

Meanwhile, provincial police are on a manhunt for members of a Chinese gang who shot and injured four men from a rival gang during a violent brawl at a Chinese Restaurant in the city last week.

The gunfight took place in the evening when both groups of Chinese were drinking at the Shi Hou restaurant in the city’s Bei Commune.

The incident is the latest involving gangsters from China who frequently fight among themselves when drunk in the province.

Many Cambodians have expressed their concerns over an increasing number of gangs coming in from China in the wake of the huge influx of Chinese investors to the country.

In February, Chinese Ambassador to Cambodia Xiong Bo said that China stands in solidarity with Cambodian authorities to catch Chinese nationals committing crimes in the country, following criticism from Cambodians on Facebook.

Mr Xiong said China absolutely supports the arrests of any of its nationals committing crimes in the country, operating businesses illegally or scamming fellow countrymen back home. 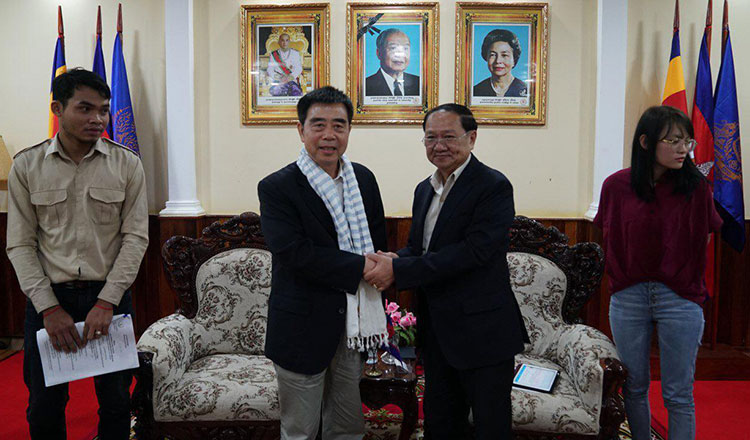 “The Chinese government appeals to all Chinese people who live abroad to respect those countries’ laws and respect their customs and live in peace,” he said.

Since 2011 until October last year, 1,133 Chinese nationals have been deported to China for offences related to cybercrime alone.

Mr Jia on Monday said that the governor’s decision to allow Chinese investment into the province has led to noticeable changes, including the construction of tall buildings.

“On behalf of the China, I would like to support the policies of the Cambodian government,” he said. “We are committed to push for more development and investment.”

According to a report by the provincial administration, up to 70 percent of investments in the province came from China.

Mr Min noted that anyone that commits a crime in the province – local or foreign – will face the law.

“On behalf of the provincial leadership, we would like to ensure the security and safety of all peoples,” he said. “The province has the capacity to manage and prevent security concerns, don’t worry.”