The Health Ministry has issued a health warning over an unregistered sex stimulant for men being sold under the brand name Force.

A ministry notice received yesterday said eight Facebook accounts were found to be advertising the product, which is apparently manufactured in France, claiming that it helps men improve their libido and also cures chronic ailments such as diabetes, stomach aches and high-blood pressure.

The notice said the company that imported the products has not registered with the ministry to allow it to carry out tests and did not have approval to import the drug.

It warned of legal action against those who continue to promote it on Facebook or distribute the drug.

Hean Kimseat, deputy director of the regulatory office at the ministry, said that despite knowing about the Facebook accounts, it was hard to identify those who were behind the advertising. 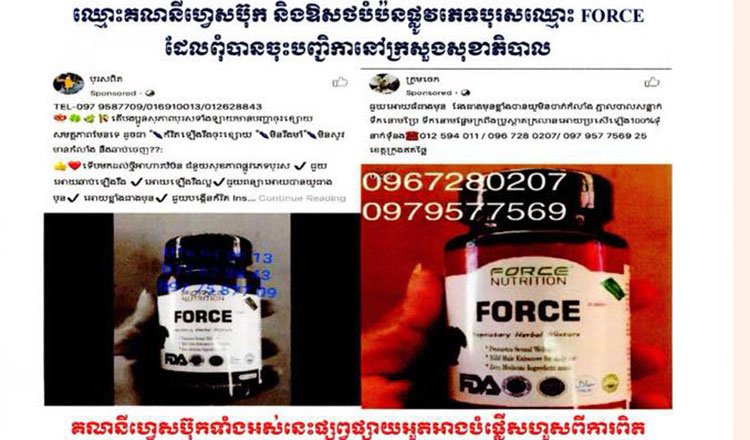 “So far, we have warned some of the distributors that we will take action and fine them,” he said. “But as for the Facebook accounts, it is hard to track the owners because they use pseudonyms.”

“This announcement is to inform the public to stop using the products because they are illegally imported. We don’t know which neighbouring countries they are coming from and we requested border officials to keep a strict lookout for these smuggled products,” Mr Kimseat added.

A man whose Facebook account under the name of Srey DaDa Online Shop was mentioned by the ministry said over the phone that he stopped selling the product a long time ago.

“I have stopped using this page for a long time and I have stopped selling Force a very long time ago,” he said. “I am just a distributor. These products are from France and may be legally registered in the future.”

Another man using a Facebook account under the name Krom Chek said that his group was informed about the notice and are discussing the matter.