It’s the story of a girl who faced a terrible childhood as a survivor of the Khmer Rouge.

Klot Vibolla returned home alone after her parents and family members were killed.

She was just a little girl when her family were forced from Phnom Penh to Battambang province on April 17, 1975.

She came back on January 7, 1979. She lived with her uncle and attended the Fine Arts School until 1986 when she got a scholarship to study to be a specialist librarian in Poland.

“I was a humble person, even though I faced many difficulties in my life,” she said. “But I never gave up. I worked actively even during the Khmer Rouge time. That was only reason I survived.”

Ms Vibolla, director of the National Library of Cambodia, told Khmer Times during an interview recently that her life had been deeply involved with the library, an important job to improve the education of citizens.

In 2002, her dream came true when she was appointed by the Ministry of Culture and Fine Arts to the top library job.

The mother of three children is still very humble and said it is satisfying to manage the nearly century-year-old library.

It was built in 1924 while the country was a French colony, and 29 years before Cambodia gained independence in 1953. She is the tenth National Library director.

The first was Prach Choeum, who later became a politician and joined the Sihanouk movement against French colonialism.

French authorities at that time treated the National Library as “brain food” where there stored tens of thousands of books about Indochina and world history in both the French and Khmer languages.

After Cambodian independence, France transferred management of the library to Cambodia.

Ms Vibolla said there were 100,000 books and archive documents on display for readers before the Khmer Rouge seized power.

The library was completely changed under the Khmer Rouge, when 80 percent of the books and archive documents were destroyed. 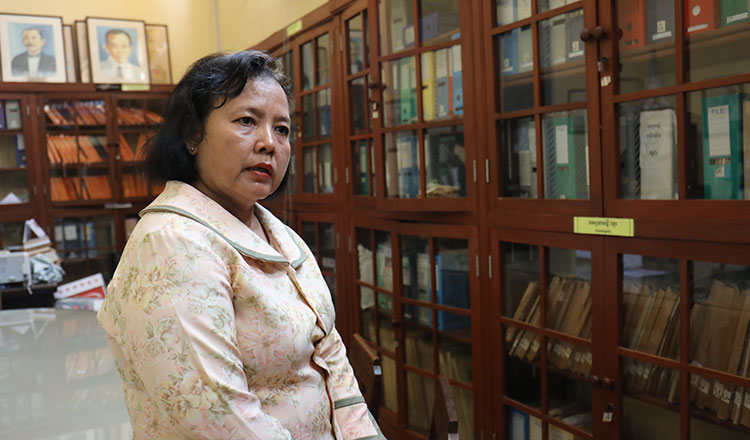 “I was so shocked when I learned that the National Library became a Khmer Rouge kitchen and an area to raise pigs and that 80 percent of books and archives were thrown out the window,” Ms Vibolla said. “Looking at the number of books and documents left over after the fall of the Khmer Rouge regime, we learned that Khmer authors in earlier times were able to publish many books.”

“I don’t understand what Pol Pot was thinking. Inside the library was the cooking area and outside the hall was managed as an area for raising and slaughtering pigs,” she added.

From the 1980s until today, the library remains one of the most valued sources of information for Cambodian educators.

But in the last decade, Ms Vibolla has noticed a sharp decline in reading because young people are no longer as interested. Instead, they are reading e-books on their phones, she said.

“We are trying to promote traditional reading via the Reading Day Festival, the Book Exhibition and public forums,” she said. “I have noted that the attitude of young people has changed remarkably. I see that students’ interest has slowly returned to reading books in the library.”

While showing Khmer Times around the library, Ms Vibolla expressed deep concern about the old building full of books and documents, some nearly 100 years old.

She said the ministry had fixed some parts of the leaking roof and planned to renovate the whole building by reinstalling a modern library system, but concerns remained.

“I have concerns about the lack of financial and technical support to renovate the building and fix all damaged books, documents and other things,” she said.

She said that in previous years, they had cooperated with the US Library of Congress which sent officials to work with the National Library.

While the building, books and archive documents are old and decayed, extra buildings will be needed for replacements in a new library system, she said.

The ministry has designed two more buildings, each with four floors, to be built in the same compound at a cost of several million dollars.

Current challenges include the leaky roof and the inability to control temperatures at a level for long-term preservation of the books.

“My major challenge is to manage and protect old books and documents which are now nearly one century old,” she said.

The space is getting smaller while the number of books, newspapers and other reading material keeps increasing.

“The National Library is the Kingdom’s treasure,” she said. “But we don’t have enough space to organise a nicer reading area based on the International Library Standard.”