Authorities yesterday began evacuating villagers affected by floods along the Sesan river in Ratanakkiri province, the Ministry of Water Resource and Meteorology said.

The ministry also asked villagers along the river to continue to take precautions following a rise in water levels.

The ministry said on its Facebook page that as of 5pm yesterday, Taveng district authorities began evacuating villagers from their homes as water levels continued to rise.

It added that that water levels in the river have exceeded the eight-metre water threshold.

Water from the river is known to flood lowland areas such as Andoung Meas, Taveng, Veun Sai and O’yadav districts.

The ministry said that residents living in those areas should prepare for the worst.

“People living along the Sesan river, please increase caution as the water continues to rise,” the ministry said.

Ministry spokesman Chan Yuttha said yesterday that the increase in water levels was partly due to water flowing from Vietnam.

Mr Yuttha said that floods will continue to affect parts of the country as a storm is brewing off the coast of Vietnam.

“Because of an incoming storm affecting central Vietnam, the Sesan river has brought water into our country,” he said.

“The armed forces and the police are ready to assist people in need,” he said, noting that there have been no injuries in the area so far.

Keo Vy, spokesman for the National Committee for Disaster Management, said yesterday that he could not determine how many people were affected by the rising waters of the Sesan river.

Mr Vy said that people living along Sesan, Srepok and Sekong rivers were informed of the situation.

He said that villagers were told to be prepared for floods and that the situation this year could be worse than last year.

“Provincial authorities have been informing them since last week that they have to be prepared,” Mr Vy said. “People in this area are used to floods and they are even more prepared for it this year.” 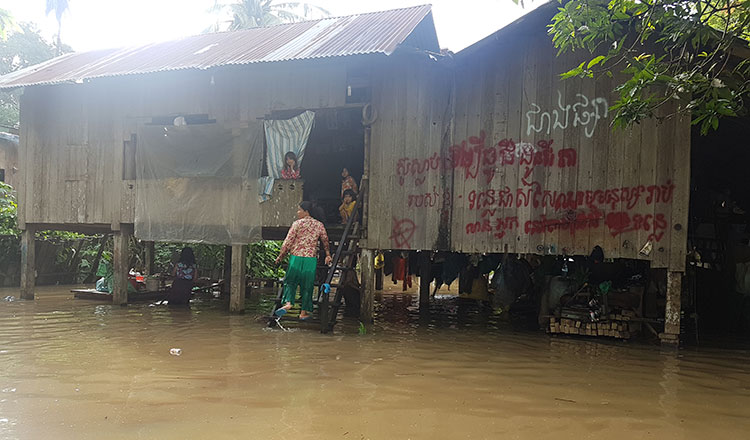 As of yesterday, floods have affected seven provinces, including Kampot, Koh Kong, Preah Sihanouk, Kep, Kampong Speu, Battambang provinces, and the capital. About 7,106 families have been affected.