Home - GDP to stay in the election contest

GDP to stay in the election contest

The Grassroots Democratic Party yesterday announced that it would continue contesting the national election after witnessing improved security for its rallies and marches.

Yang Saing Koma, the GDP’s prime ministerial candidate, told a press conference yesterday that his party decided to continue contesting the poll set for July 29 thanks to improved protection.

“Although there are some obstacles, we must move on because recently there was an improvement. Interior Minister Sar Kheng has ordered authorities to stop discrimination, which is a positive sign, and we decided to continue contesting the election,” Mr Saing Koma said. “We will not pull out.”

The GDP threatened to withdraw itself from the poll last week as it accused authorities of failing to control traffic and provide security for its marches, while also noting threats against its activists who distributed leaflets in the provinces.

Mr Kheng then called on all law enforcement agencies and local authorities to stop discriminating against supporters of political parties after the GDP warned it would withdraw from the national election if its campaign continued to face disruptions.

Interior Ministry spokesman General Khieu Sopheak denied that the government failed to treat all political parties equally and noted that it was an excuse that the GDP used to gain popularity.

“Security forces are being sent out to protect the rallies depending on the number of supporters, so more or fewer depends on the size of the march,” Gen Sopheak said. “Security forces are told to ease traffic flow and offer help as needed. There is no discrimination at all.”

About 200 GDP supporters and members marched yesterday from their party headquarters in Por Senchey district, snaking through many streets in Phnom Penh as security protection was ensured.

Mr Saing Koma said he expects about 80 percent of eligible voters to cast ballots on July 29, and for those who voted for the opposition CNRP in the 2013 national election to vote for the GDP as a new alternative for change. 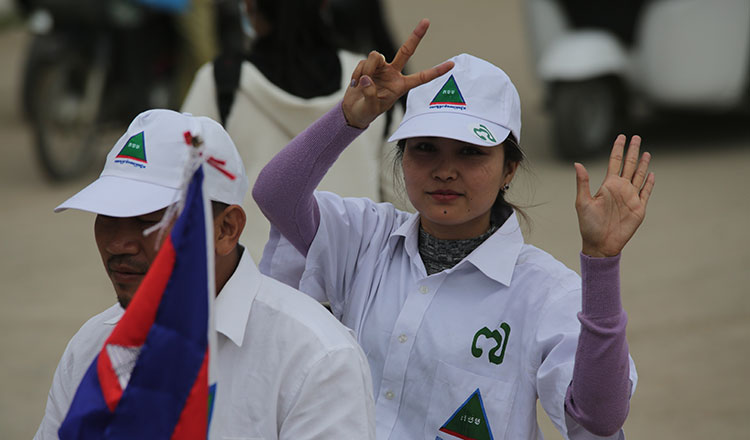 GDP supporter Mean Eang hailed the party’s decision, saying that with good platform, the GDP is a new choice for Cambodians.

“I support the GDP because of its commitment and political messages that they deliver to the people. The GDP would definitely replace the CNRP in this election,” Mr Eang said. “I want change and I want to see competition among all political parties, so I hope people will vote for the GDP and give it the opportunity to turn a new page of politics in Cambodia.”

During a visit to Por Senchey district last Friday, Phnom Penh Governor Khuong Sreng told reporters that authorities were ready to offer security for marches and rallies to all 20 political parties, although some had failed to notify them about their campaigns.

“Do not say that we discriminate against any political party,” Mr Sreng said. “We, authorities, are keen to work and to collaborate with political party members to ensure a safe environment. But instead, some parties did not allow police to go near their marches because they think we would interfere or threaten them.”