During a short visit to North Korea, Raquel R. Bacay witnesses how well-developed the capital city of the Democratic People’s Republic of Korea is. From factories to schools and hospitals, Pyongyang is surely a sight of progress. What’s more astounding is the fact that children’s hospitalisation and education come absolutely free.

Near the picturesque Taedong River proudly stands the six-storied Okryu Children’s Hospital. Built in the Munsu area, the children’s medical facility fronts the maternity hospital and a street that houses several other medical institutions in Pyongyang.

With its façade painted in green, white and orange, the hospital has a total floor space of 32,800 square metres that holds various curative and treatment rooms, operating rooms and patient wards furnished with the latest medical equipment. The medical centre also has classrooms, playgrounds and resting areas.

The completion of Okryu Children’s Hospital helps put combined medical service for children and scientific researches on a cutting-edge basis.

But what makes the hospital remarkable is how it is making use of a national telemedicine network, where the hospital is linked by computer and video screens to other provincial children’s hospitals throught the major provinces in the country.

The hospital boasts Siemens diagnostic X-ray machines and CT Scan. It also takes measures to fully ensure the conditions of the units for intensive treatment; and surgical rooms are always sterilised and dust-free.

According to Dr Kim Un Song, North Korean children usually get diarrhea and gastrointestinal problems during the summer season, and respiratory ailments during the winter. The hospital welcomes all children, and make their medications and hospital visits as enjoyable and stress-free as possible.

In the DPRK, health care is free, as with education.

The visit to the hospital, made at our request and without much prior warning, gave our team a firsthand and unstrained insight into the healthcare system in Pyongyang. We were no under illusion that it may not represent the whole nation’s healthcare system for children as despite its modern structures and facilities, some primitive images were still there to be seen.

However, the fact that they have telemedicine connecting the hospital to other children’s hospitals throughout the major provinces speaks volumes of the efforts that the North Korean government is putting in uplifting the welfare of its people.

In another visit to a children-centred institution, the Pyongyang Teacher Training College, the state-of-art facilities and teacher’s training methods were definitely impressive. A virtual reality has also been made available to aid in the education system.

According to our guide, North Korea recently started to introduce advanced technology for the training of future schoolteachers.

At the newly remodeled Pyongyang Teacher Training College, future children’s educators – predominantly females – study practical and theoretical lectures on how to educate pre-school up to grade school children all throughout North Korea.

Children, as seen on North Korean television and in real life, seem to be talented in music, computers and sci-tech modules and teaching aids, including virtual reality and 3D display technologies.

In one classroom, a large widescreen monitor displayed animated avatars representing everyday primary school students. Speaking to the virtual children through a microphone, students responded in a timely manner.

When a college student asked one animated pupil on the screen how they were, the students answered in unison: “We are very fine,” just like a teacher and a child communicating in a real classroom, and followed it through with “How about you?”

Artificial Intelligence (AI) plays a key role in educating and training future teachers, and it’s evident everywhere in the training premises. Students also hold role plays among themselves – some play as pupils in classrooms while some plays as teachers – as their way of observing personalities and behaviours in real student-teacher encounters. 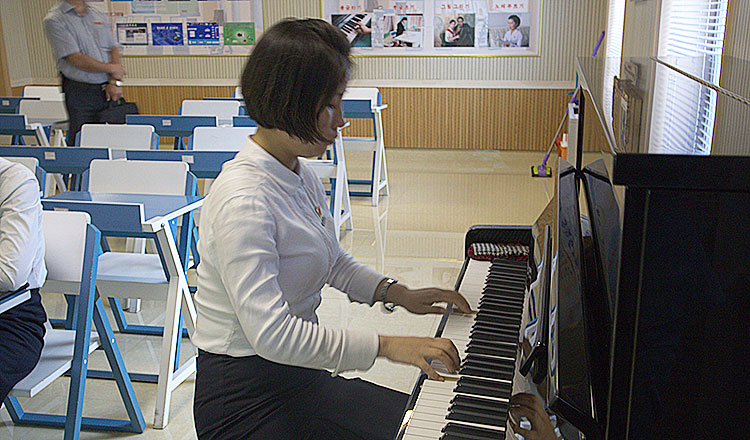 Founded in 1968, the college has about 1,600 students enrolled for this academic year.

In search of forgotten pasts and forsaken identities

In the market for a new pet?