Home - Hounds off the hot plate!

Hounds off the hot plate!

The owners of Sabay Vegilicious, a vegetarian restaurant in Phnom Penh’s Street 288, ironically used to serve dog meat in their previous eatery. Moved by the laudable efforts of dog rescuers Marc Ching and Dr. Lucy Haurisa, the owners recanted and turned over a new leaf. Rama Ariadi tells their story.

There are plenty of arguments to be made for and/or against the consumption of dog meat – yet no consensus about the ‘correctness’ of the practice has been reached. For those who do not oppose to seeing human’s canine compatriots on a serving dish, the argument, more often than not, assumes a cultural stance – with proponents of the practice claiming that the consumption of dog meat has its roots in history (thus, identity), and as such, needs to be preserved.

On the other hand, those who consider dogs as man’s best friend would posit the argument that while such practices may be deeply rooted in history, the impetus that gave rise to such practices have all but disappeared, rendering the practice obsolete. 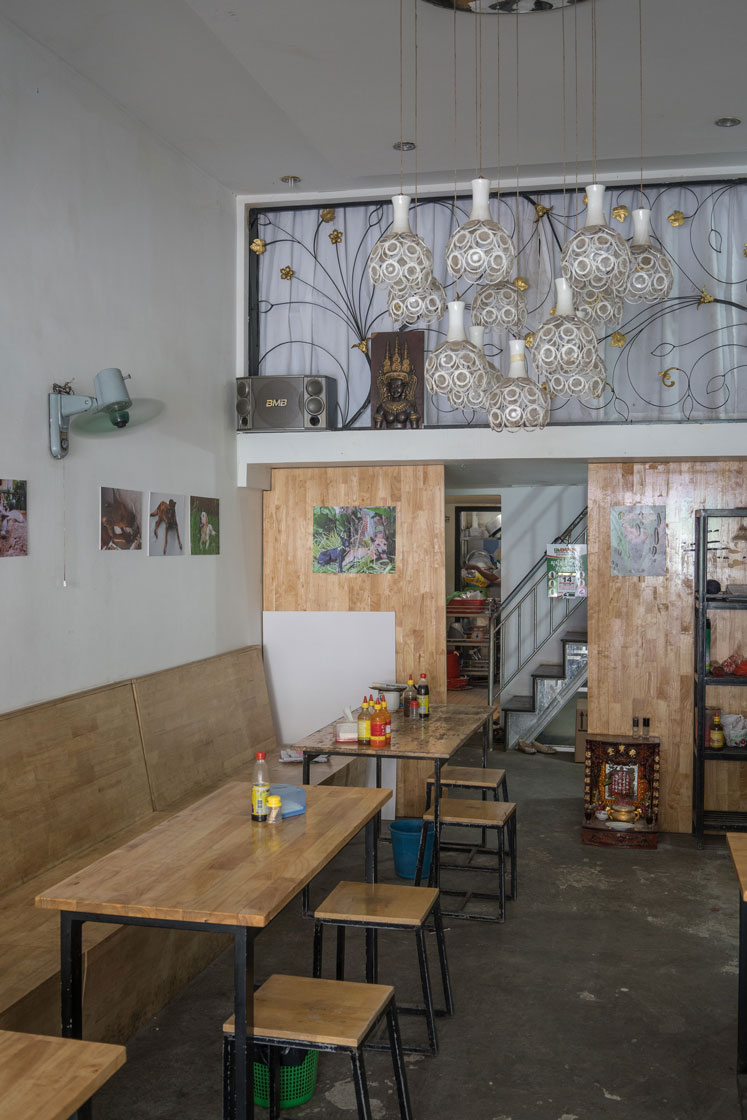 Throughout Asia, however, there exists another argument that claims to have its roots in ‘science’ – that hounds on a hotplate has medical virtues for various ailments that plague the human body, with the taboo ingredient cited as a cure-all for illnesses that range from the mundane to the outright bizarre. A panacea that can cure the common cold as well as sexual dysfunction, or so it has been said on the streets. While the truth behind those hearsay remains debatable and the evidence to back such claims remain scant, it hasn’t stopped proponents of canine consumption from perpetuating the practice.

Cambodia, it seems, is no exception. “Dog meat is very popular among Cambodians,” said Sim Bonith, who manages the recently opened vegetarian eatery, Sabay Vegilicious, in Phnom Penh’s leafy BKK1 district. “We estimated that at least 60 percent of all Cambodians have consumed and/or consumes dog meat – and the prevalence of such practice is on the rise.”

As disconcerting and paradoxical to the norm this practice may be (after all, the strain of Buddhism that most Cambodian adhere to considers dog meat as ‘forbidden meat’), there are reasons behind the increasing consumption of dog meat in the Kingdom – with the most cited reason having its roots in Chinese traditional medicine.

“Dog meat is considered a ‘hot’ meat – which is believed to be able to raise the internal temperature of the consumer,” explained Bonith. “This is why the consumption of dog meat tends to spike during the cooler months.”

For a brief while, Kem Soksyna and Chom Dymong (also known as Mong), the owners of Sabay Vegilicious that Bonith manages, were a part of this trade. Prior to their plant-based venture, the couple owned a stall that serves dog meat in the outskirts of the capital, a stone’s throw away from the airport. “For five years, we served dog meat from our kitchen – and on an average day, we could expect to earn between $25-30 from sales,” explained Mong. “We didn’t know where the dogs came from – where the meat originated, the vendors never disclosed the facts to us.”

This is the actual face of the dog meat trade. With demands on the rise, the unregulated ‘commodity’ is more often than not, supplied by vendors with unknown credentials. “It is often said that dog meat is cheaper and tastier than beef,” continued Mong, who himself, had never tasted the meat he once hawked day in, day out. “In reality, dog meat that is cheaper than beef is likely to have been sourced illegally – through cross-border smuggling, or stolen from someone’s home.” The chance to break the habit came in November 2016, when Soksyna and Mong met with Marc Ching from Animal Hope and Wellness Foundation. “He came to our place and offered to finance a restaurant – as long as dog meat isn’t on the menu,” continued Mong. “We wanted to put an end to the slaughter, while at the same time, make a decent living for our family; so, we decided to go ahead and open a plant-based restaurant.”

The resulting venture is the exact opposite to what Soksyna and Mong had once dabbled in. Whereas in their previous joint, the door to their restaurant is a one-way street to eternity for pooches, Sabay Vegilicious is definitely more welcoming to our four-legged friends.

The menu, is decidedly herbivore-friendly – with analogues made of mushrooms and soy replacing meats and other animal-based proteins. Craving a jerky? Worry not – it’s made of shredded shiitake. What about something substantial? Tempeh is served on its own, to be eaten with sweet, viscous soy sauce, or re-imagined as a pate that is served as a side to a delightfully tangy, crunchy salad. 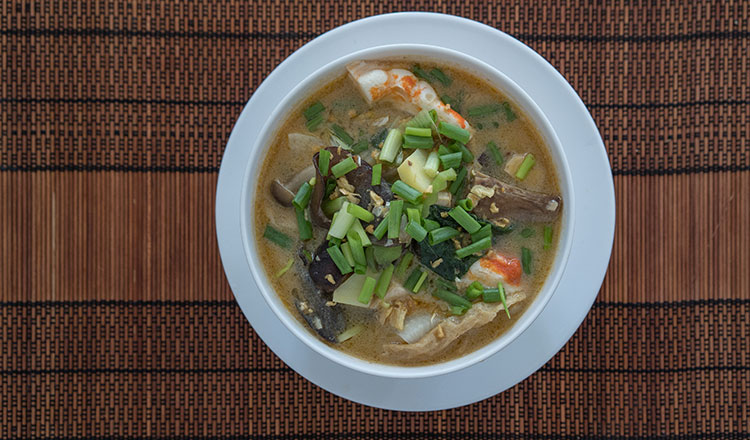 At the first glance, it doesn’t seem as if Soksyna and Mong are doing anything that hasn’t been done before, but the fact that Sabay Vegilicious makes no pretense about being a plant-based restaurant more than makes up for the range of its offerings. Absent are the word ‘beef’ or ‘chicken’ in its menu – this is a vegetarian restaurant that caters for serious adherents of the diet. And with that, gone are the taste of pseudo-chicken broth – their noodles are undoubtedly vegetarian in the narrowest sense of the word.

Given the increasing popularity of dog meat among Cambodians, one may begin to wonder — are people coming in big enough numbers to sustain the business in the future? “The majority of our customer to date are expatriates, but we hope to expand our operations in order to reach the broader mass,” said Bonith. “Through franchising, this is possible – but for now we are taking smaller steps, for example, by opening workshops to raise awareness about the issue.”

Dr. Lucy Haurisa, a volunteer partner with Animal Hope and Wellness Foundation, concurred and argued that sustainability is indeed a key to the success of such ventures. 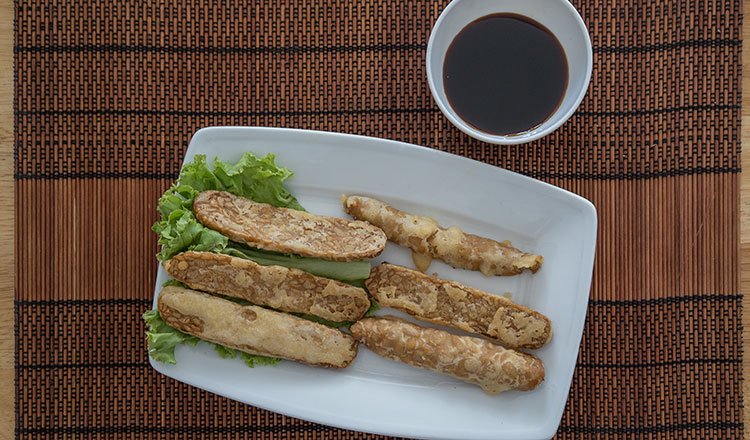 “Many well-intentioned aid have been poured to raise awareness on the matter but within the span of a few months, most of the ventures collapsed and the proprietors have no choice but to return to their old line of work,” she explained. “This is why we opted for the ‘social entrepreneurship’ model – by limiting funding to the initial six months, we are creating incentives for the owners to continue developing various aspects of their businesses, which helps ensure the sustainability of their practice in the face of increasing competition.”