Home - THE FAULT IN OUR STARS

THE FAULT IN OUR STARS

John Green’s 2012 novel ‘The Fault in Our Stars’ is a young adult fiction gem, which conveys so much sadness but is never overemotional. Considering the heavy storyline, the book was able make jokes about death. The book had such a huge fan base that when it was adapted into a motion picture for the silver screen in 2014, many doubted if the movie would touch them as much as the book did.

I think the screenplay by Scott Neustadter and Michael Weber and the direction of Josh Boone, while not particularly flashy or stylistic, is effective in a journeyman kind of way that allows for the narrative to speak for itself, letting readers have the organic feels they had when they read the book. And considering the movie had a modest budget of only $12 million, I felt it did a good job of minimalism without making the viewer noticing it.

‘The Fault in Our Stars’ captures the lives of Hazel and Gus in a unique way throughout the film. I liked how the director uses music and electronic devices, such as iPhones, to keep the internal dialogue and narrative going. It allows the viewer to be connected to the main characters even when they are apart.

What’s great about the movie is that it goes beyond the sappy teenage love aspect of the story because the writers were brave enough to ask the “big” questions about life and death. While we may never get definitive answers, the movie does provoke the viewers to think about life and death in a different paradigm. The movie reflects and helps to shape the emerging eclectic spirituality beliefs that exist in modern society.

The film revolves around Hazel Grace Lancaster (Shailene Woodley), a 16-year-old girl who has been living with cancer for years. Her condition, once gravely critical, has now stabilised thanks to an experimental drug treatment. But then, she has to wheel around a portable oxygen tank wherever she goes. Following a doctor’s diagnosis of depression, Hazel is sent to a support group by her mom Frannie (Laura Dern) so she may talk out with other kids her age on how she is feeling about her disease and her life.

The support group holds sessions in a church led by a late 20s survivor of testicular cancer who lays out a rug which becomes known as the “Heart of Jesus” and becomes an ongoing joke throughout the movie. The “Heart of Jesus” is where Hazel meets Augustus Waters (Ansel Elgort), an ex-basketball player and amputee who is currently in remission from osteosarcoma. He is sexy and smart, and the first boy ever to glance Hazel’s way. The two of them form a deep friendship that eventually leads them to love. Hazel, initially afraid of falling in love as she might die anytime soon, throws her reservations out of the window and sticks with Gus.

The young lovers share their stories, passion for books and the underground culture references not many teenagers their age would know about. This is how Gus would know that Hazel is obsessed with the novel “An Imperial Affliction” written by reclusive author Peter van Houten (Willem Dafoe). The book tells a story of a girl dying of cancer, but the ending is so abrupt Hazel wants to get a closure for the story’s character and for herself as well.

Eager to make Hazel happy, Gus writes to Mr van Houten who, to Gus’ surprise, responds by inviting him to see the author in Amsterdam. Gus decides to cash in his “wish” from the Genie Foundation for a trip to Amsterdam. He brings Hazel along, and the two decide to take the author up on his offer to meet. Hazel, obsessed with finding out what happened to the other character of the book, sees it as a metaphor for her own story.

But meeting Peter van Houten proves to be frustrating and disappointing as he has quit writing and become an alcoholic. It also turns out that he never actually wrote back a letter to Gus; his assistant did. He goes on a tirade that he will not be treating them in a manner they are accustomed to because they are children who are about to die. 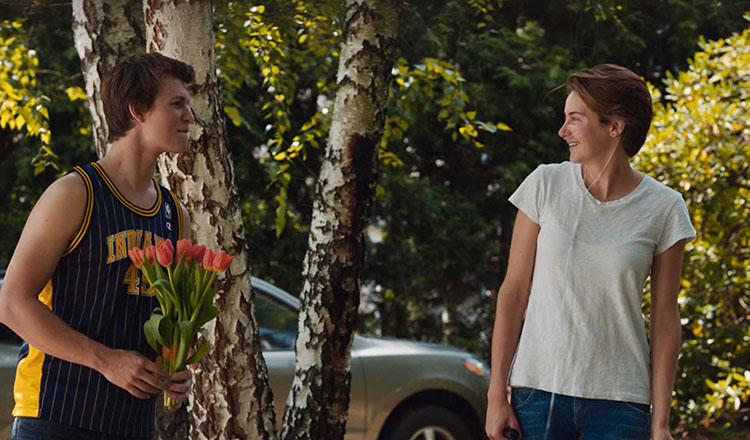 This rough interaction forces Hazel and Augustus to re-examine their lives in a different light. And things sort of change from this moment on in the movie. The two are let down by the author they’ve been dreaming of meeting, but the assistant runs after them and tries to make up for her boss’ behaviour.

The assistant takes them to the Anne Frank House, where we watch Hazel drag her oxygen tank flight after flight of the narrow staircase as Augustus worries for her. Viewers hear Anne Frank’s words about life and death and hope in the background. It’s moments like this that makes the movie more than meets the eye.

When the two get back home, viewers find out one of them is no longer in remission as the cancer has come back. This is in itself the ending of the book they were ready to leave behind.

So does nihilism have the last word? I honestly do not know. The question that haunts the entire movie is how can there be meaning in the universe when two wonderful young kids are dying of cancer? As any Philosophy 101 student knows, our attempts to justify the existence of evil through abstract argumentation are fairly useless exercise. But we grow to understand at the very least that 0-1 is infinite but 0-2 has even greater infinite potentials because it’s all about the perspectives of what we are given. And that concept is pretty much true for how long we get to exist here on Earth.

‘The Fault in Our Stars’ is my pick for this week’s Binge Worthy not because it’s an epic love story that transcends time and place – as the movie and novel tend to put it. It’s because it is such a simple story in itself, told in a remarkably real, honest and poignant way. Get your tissues out and stream the film this weekend on Netflix.