As floods hit major provinces of the country, the authorities are preparing for a new storm brewing in the South China Sea, officials said yesterday.

Mr Vy noted that Koh Kong and Battambang provinces were hit the hardest.

He said that provincial authorities evacuated a total of 3,501 families from their villages in Koh Kong province, while in Battambang a total of 109 houses and thousands of hectares of crops were damaged.

“We are still in the process of collecting further information from local authorities,” Mr Vy said. “The flooding is more serious in Koh Kong and Battambang provinces, where people needed to be evacuated out of their villages.”

The Water Resources Ministry said yesterday that a new storm is brewing east of the island of Hainan in China and that it is expected to hit areas of Indochina this week.

The ministry warned that the storm will most likely hit Cambodia the hardest. Residents must be cautious with their day-to-day activities and ensure that precautionary measures are taken, it said.

“Heavy rain will hit coastal areas, highlands, mountain ranges and provinces along the Cambodia-Vietnam border from July 19 to July 21,” the ministry said in a statement.

The ministry said that Chirou and Tonle Bit communes in Tbong Khmum district has suffered from massive flooding after a river bank collapsed, making the communes even more prone to floods.

It added that provincial authorities are now assisting residents living along the river bank to seek shelter. 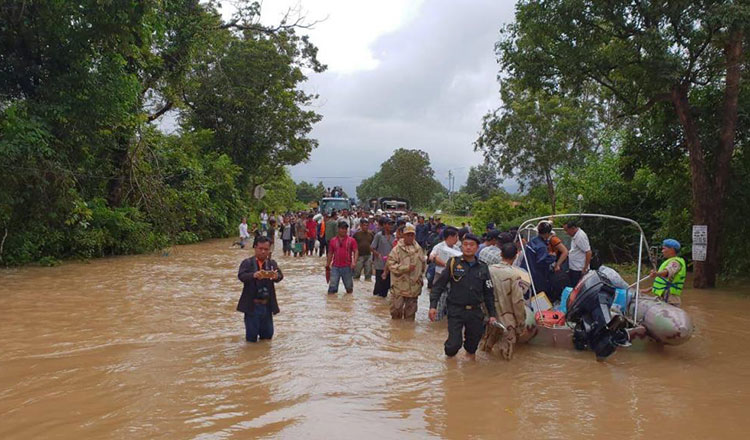 “The flood hit Koh Kong province in four of its districts,” she said. “Local authorities assisted and rescued residents caught in the rain.”

Kampong Speu Governor Vy Samnang said yesterday that his province was also hit by flooding in two communes; Prey Romdol and Taing Kcha in Phnom Sruoch district, where water was as high as one metre.

Mr Samnang said that a rescue operation was being prepared to help evacuate villagers in the districts affected by the flood. National Road 4 was submerged in water ranging from one to ten metres, causing parts of the road to be temporarily closed.