As floods inundated Preah Sihanouk province yesterday, hundreds of motorists were left stranded along National Road 4 in Kampong Seila district prior to being evacuated.

The floods not only affected motorists on the National Road, but also residents in Samraong and Stung Chral villages, where two boats were being prepared to help evacuate villagers.

“If it doesn’t rain tonight, we’ll be able to open the road tomorrow afternoon,” Col Chanthy said. “All sedans, SUVs and vans were successfully taken off the road, but we had to leave the container trucks there.”

Over the weekend, the Ministry of Water Resources said that a low-pressure system has caused continuous rainfall in Thailand and Laos, leading to a rise of the Mekong River’s water level.

Water Resources Minister Lim Kean Hor said that the upper Mekong River in Cambodia will rise and begin to flow through rivers and areas along the upper Mekong basin, leading to floods in some provinces including Preah Sihanouk.

“We stopped all traffic in order to avoid any incidents,” he said.

Mr Penh said that authorities believed the flooding was caused by rising water levels in the nearby Samraong river.

Boeut Sdoeung, a motorist who was trapped on National Road 4 while driving with her husband, said the flooding hampered her plans to return to Koh Kong province.

Ms Sdoeung said that she was concerned about the well-being of her husband who was just discharged from a hospital.

“I wanted my husband to rest, but I don’t know how to go home,” she said.

Meanwhile, in O’Bakrotes commune’s Samraong and Stung Chral villages, more than 300 families have been affected by the floods, with many evacuated from their homes that are now under water. 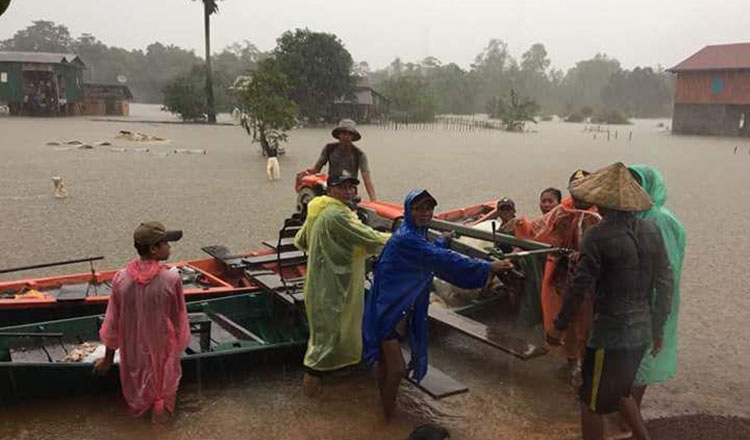 “They evacuated to a safe area,” Mr Teun said. “They are familiar with this situation because it happens every year.”

Mr Penh, the deputy district governor, said that the Cambodian Red Cross has been aiding villagers affected by the floods.

“They were running out of food, but the Cambodian Red Cross already arrived, and they are helping the villagers,” Mr Penh said, noting that some villagers sought refuge in a nearby mountain to avoid rising water. Sok Leap, a villager from O’Bakrotes commune, said yesterday that he and his family face difficulties during floods every year.

“I cannot go to work; I can’t earn a living to put food on my table,” he said. “We can wait a week at most, and then I will have to find a job.”

Mr Leap added that his livelihood depends on his ability to travel in and out of the area.

Hang Sambath, another villager from the commune who got stranded on National Road 4, said that he was informed of the road closure by police. “If I had known there was flooding, I probably would not have come this way,” he said. “Now I will have to eat lunch here.”