The National Election Committee yesterday said that the indelible ink to be used in the election on July 29 is of good quality and cannot be washed off.

The NEC yesterday had several people’s fingers dipped in ink at its headquarters in Phnom Penh. ​During the testing, the NEC used haircare products which contained a chemical to try and clean the ink, noting it failed to do so. The NEC also dismissed outsiders’ claims that the ink would be cleaned off within 24 hours.

The NEC has paid $800,000 to purchase 51,000 bottles of indelible ink from Mysore paints and varnish company in India.

NEC secretary-general Tep Nytha told a press conference yesterday that the indelible ink is of good quality and could not be washed off.

“During last year’s commune election, we also purchased it from the same company,” Mr Nytha said. “We tested its quality and it has good quality.”

During the 2017 commune election, the opposition CNRP said that the ink could be removed after being tested with hair perming lotion from Thailand which contained a chemical that can fade colour.

Tep Trou, a representative of Reaksmey Khemra Party whose finger was dipped in ink yesterday, said that the ink could not be cleaned.

“For me, they have cleaned my finger with bleach, but it can’t be washed off and we still see the ink,” Mr Trou said. “The black ink cannot be erased.” 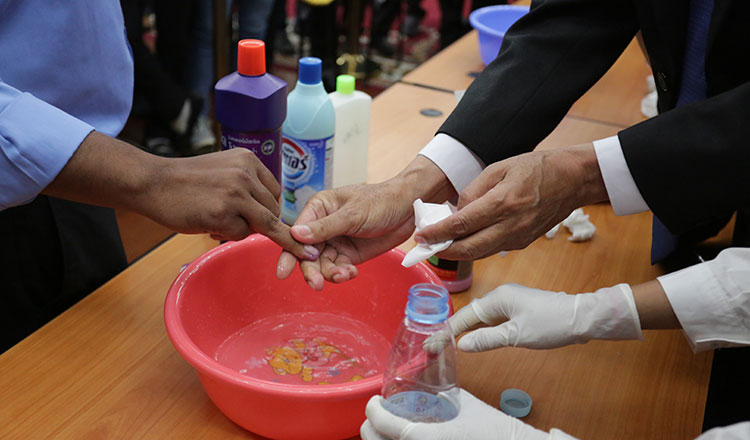 Chao Toeng, a representative from the ruling CPP, echoed Mr Trou’s claim, saying that the ink could not be cleaned.

“When I cleaned my finger with bleach and shampoo, it could not be washed off and I still see the colour,” Mr Toeng said. “I think the public will understand clearly that the ink cannot be cleaned off and this will make the public trust the NEC.”

Sam Kuntheamy, executive director of election watchdog Nicfec who also had his finger dipped in ink yesterday, said that the indelible ink was very important because it could prevent double voting on July 29.