Preah Sihanouk provincial police are on a manhunt for members of a Chinese gang who shot and injured four men from a rival gang during a violent brawl at a Chinese Restaurant in the city on Monday.

Provincial deputy police chief Colonel Bour Sothy said yesterday that the gunfight took place at about 8.30pm when both groups of Chinese were drinking at the Shi Hou restaurant in the city’s Bei Commune.

“No arrests were made yet and we are now seeking the group responsible for the shooting,” he said.

Second Lieutenant Chun Pheng, a commune police officer, said a group of six and another of ten people were eating and drinking in the restaurant on the night of the shooting. He said an argument took place and members of both groups started punching and kicking each other.

“During the fight, one of the men in the smaller group took out a gun and fired ten rounds at the other group, injuring four,” he said. “After the shooting, the smaller group left the restaurant and fled on their motorbikes.”

Lt Pheng said that police stationed nearby heard the commotion and rushed to the scene, taking the injured to hospital.

All four are in the Kingdom on tourist visas and are still being treated in hospital.

The incident is the latest involving gangsters from China who frequently fight among themselves when drunk in the province.

Many Cambodians have expressed their concerns over an increasing number of such gangs coming in from China in the wake of the huge influx of Chinese investors to the country. 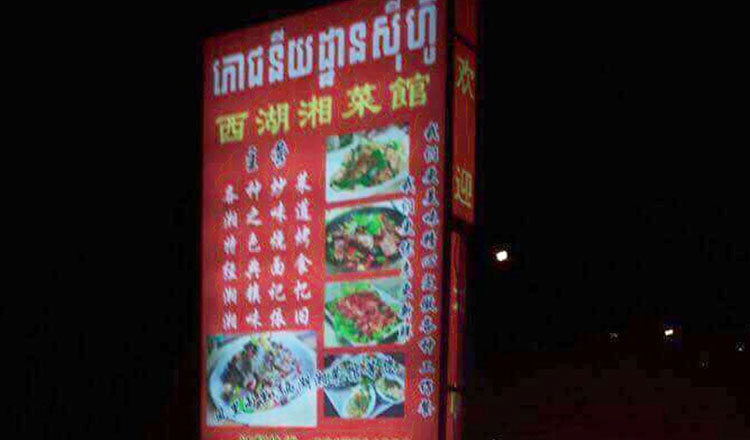 Many of these gangsters prey on their countrymen and have been arrested for cybercrime and kidnapping for ransom.

The outcry over Chinese committing crimes in Cambodia prompted Chinese Ambassador Xiong Bo in February to express China’s support for Cambodian police efforts to crackdown on these criminals.

He said his country absolutely supports the arrests of any of its nationals committing crimes in Cambodia, operating businesses illegally or scamming countrymen back home using VoIP.