The Preah Sihanouk provincial administration on Sunday held a road safety drive which included a blessing ceremony along National Road 4, a notorious stretch of road that has been the scene of multiple deadly crashes and where many motorists stop while travelling to pray to the spirit of Yeay Mao.

Provincial Governor Yun Min said the ceremony was held because many superstitious Cambodians believed it would keep them safe.

“We invited about 100 monks for the ceremony in accordance with the tradition and beliefs of our ancestors that such rites could bring peace and happiness along the road and help reduce accidents,” he said. “However, the religious ritual is just part of a belief and if people do not respect the traffic laws, accidents will still happen.”

“During the ceremony, I stressed the need for people to pay more attention while driving. We cannot just depend on the ritual to create safe conditions; that is impossible,” he added.

The large number of trucks that carry freight between Phnom Penh and Sihanoukville have earned National Road 4 a reputation of being the most dangerous road in the country.

The event on Sunday was held near the accident-prone Yeay Mao curve section on National Road 4, where many motorists stop to pray over a cliff while on the way to Sihanoukville to ensure they do not crash. Yeay Mao is a goddess in charge of forest valley that lies beneath the cliff. 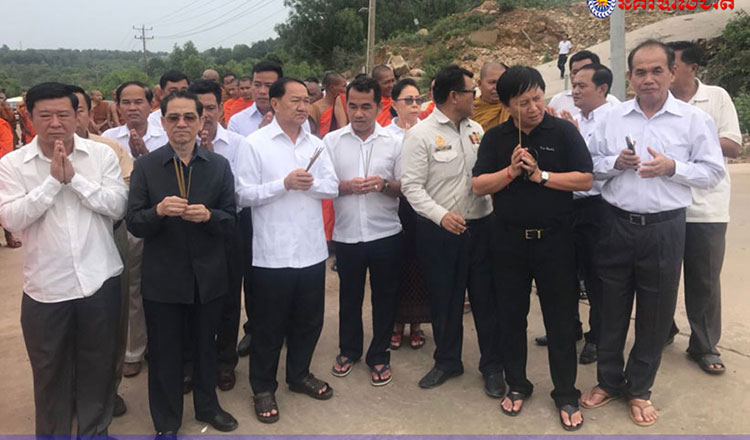 Institute for Road Safety director Ear Charya said that the ceremony was just a way to show the authority is paying attention to people’s safety, although this did not really address the root cause of accidents.

“It is not wrong for Cambodians to hold the ritual, but accidents can only be reduced if the authorities study the situation and improve the condition of roads, including small ones, put up road safety signs and people drive more carefully,” he said. “To me, holding such a ritual is just nonsense and won’t reduce accidents.”

“What the authorities should do is take more concrete and measurable actions such as installing cameras to detect speeding,” he added.

Last month, the World Bank agreed to provide Cambodia with a $110 million, interest-free loan to restore the key national highway linking Phnom Penh to the country’s only deep-sea port.

With the money, Cambodia will improve the condition, safety and climate resilience of National Road 4 along which heavy traffic passes through several economic zones and rich agricultural areas. It is also expected to provide speedier access to emergency vehicles.

A 200-kilometre stretch will be upgraded with an overlay of asphalt, shoulders will be replaced and drains and bridges will be built along flood-prone areas.

“I cannot remember the exact figure of accidents on that road, but I know it is not high,” he said. “The governor just held the ceremony to promote more road safety awareness.”

“We are doing our best to prevent accidents,” he added. “Accidents mostly happen at night and during rain. Careless drivers who speed, and are careless while overtaking are to blame for most accidents.”

According to a National Police report, 1,780 people died and 5,539 people were injured in traffic accidents nationwide in 2017, compared to 1,717 deaths and 6,607 injuries the previous year.