Election watchdog Nicfec yesterday said that the National Election Committee’s text messages targeting Cambodian voters abroad is ineffective because they need to travel back home in order to cast their ballot.

The criticism came after the NEC encouraged Cambodians working abroad to return to Cambodia to vote in the national election on July 29.

“The NEC calls on all citizens living abroad to come home and vote this July,” the text message read.

The message was also sent to members of families of Cambodians living abroad, urging them to inform relatives to come home to cast their vote. 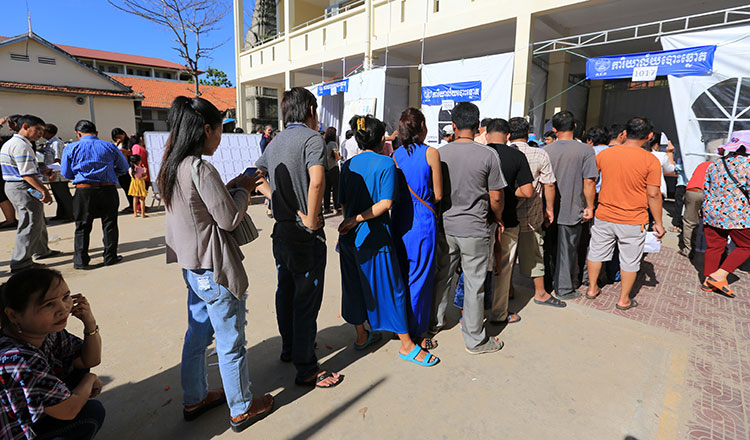 “Most people living abroad, some of them were not even registered in the 2017 voter list, while some people can’t vote because they can’t afford to come to Cambodia to cast their ballot,” Mr Kuntheamy said. “People aren’t interested in what the NEC SMS has to say because they have already decided whether or not they’re going to vote.”

NEC spokesman Dim Sovannarom said yesterday that the election text message was sent to about five million cellphones through a targeting process by the committee.

“We look at names listed on a voter list, then we look at Google maps to bring up the location of the nearest polling station,” Mr Sovannarom said. “We also disseminate the information through calls, radio and TV broadcasts.”

The NEC said that in the 2013 election, the committee made similar announcements to about 9.5 million voters. It reported that voter turnout reached 68.5 percent, marking the lowest turnout in the nation’s history.

CPP spokesman Sok Eysan said yesterday that voter turnout will be higher this year when compared to the 2013 election.

“People abroad, especially in neighbouring countries, will come and vote on July 29,” Mr Eysan said, noting that migrants in South Korea and Japan might have a difficult time casting a ballot. “We hope people working in South Korea and Japan will vote, but we aren’t expecting a lot to turnout because people working in that region will have to spend a lot of money to return.”