The Ministry of Water Resources yesterday advised farmers in Stung Treng, Kratie, Tbong Khmum and Kampong Cham provinces to speed up harvesting their crops due to impending floods coming in the next few days.

In a statement, the ministry said a low-pressure system has caused continuous rainfall in Thailand and Laos leading to a rise of the Mekong River’s water level.

Water Resources Minister Lim Kean Hor said that over the next two to three days, the upper Mekong River in Cambodia will rise and begin to flow through rivers and areas along the upper Mekong basin.

“Farmers who live and plant crops in Stung Treng, Kratie, Tbong Khmum and Kampong Cham provinces along the waterways are urged to quickly harvest their produce before the onset of the floods,” he said.

Hout Chamnan, 47, a farmer in Tbong Khmum province, said that the local authority had also informed villagers of the impending floods.

“We are prepared because every year this area always floods,” she said. “We harvest our crops and store some in our houses before the floods.” 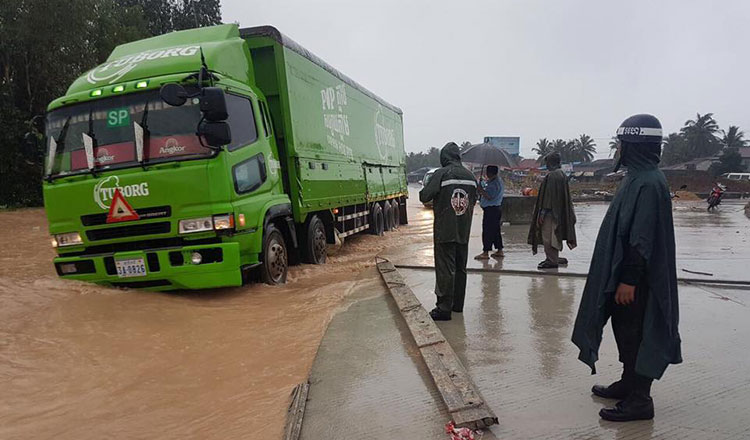 The ministry statement also said that Preah Sihanouk province authorities closed the Stung Samroang bridge to traffic on Sunday because the water level in the river was rising.

“The water level fell a little today and the bridge was reopened,” it said. “Motorists, however, must be on the alert when travelling.”

Meanwhile, a man was seriously injured yesterday afternoon when strong winds caused a tree to fall in Phnom Penh’s Chamkar Mon district. The tree crashed on a tuk-tuk and injured its driver, who was taken to hospital.

Last month, Phnom Penh city hall held a meeting over the creation of a working group to monitor the growth of trees along roads in the capital in a bid to create a green city and reduce incidents of trees falling during strong winds. Officials are expected to be tasked with observing and ensuring the proper growth of tress on a regular basis and authorised to plant or cut trees when necessary.