Fishery authorities have seized a big quantity of illegal fishing equipment and educated more than 200 people in a five-day crackdown on areas prone to illegal catches.

The crackdown took place across Stung Treng province and was carried out by the provincial department of agriculture, forestry and fisheries. It was part of an operation during the prohibited fishing season.

“Normally, the working group constantly patrols areas everywhere inside the province because this is the prohibited fishing season,” he said. “Otherwise, the fish breeding will be destroyed.”

“Officers have cracked down on this for quite some time. And this operation will be continued to ensure that the fish numbers are protected and increased,” he added.

Tum Niro, chief of the provincial fishery administration, said that thousands of metres of fishing nets were seized around three main rivers in the province, resulting in the education of more than 200 people.

“The operation was not just one day,” he said. “It ran from July 1 to 15 and we seized very long fishing nets inside the Mekong, Sekong and Sesan rivers.”

“We did not arrest anybody in the operation. We only educated them,” he added. “The total number of fishermen educated was 257.” 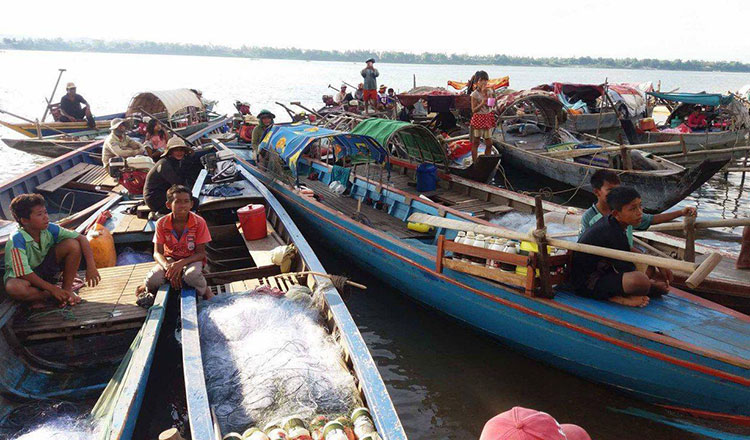 Mr Niro said the fishing gear seized amounted to more than 30,000 metres of fishing nets of various types including large-hole and tightmesh nets.

The 257 people involved in laying those nets were educated and ordered to sign a contract promising not to do it again.

Mr Niro said people need to understand that illegal fishing on any scale would cause the destruction of natural fish stocks.

According to a report from the Ministry of Agriculture, Forestry and Fisheries, the number of illegal fisheries shut down by authorities throughout the country totalled 3,925 in 2017, a 7.5 percent increase from 2016. ​It added that authorities destroyed 150 kilometres of nets, while 80,000 kilograms of fish were released.

Interior Minister Sar Kheng ordered government officials to crack down on fishing crimes after travelling by helicopter over the Tonle Sap lake in January last year.