The Ministry of Water Resources yesterday announced that floods will hit several provincial areas due to strong weather and water flow from Thailand.

“Villagers living around Stung Takouy river need to be careful because the river is flooded,” the ministry said. “People who travel on bridges must also be careful and avoid getting injured.”

The ministry added that the portion of the river in Preah Sihanouk province became flooded yesterday due to excess water flow.

Nga Lyhong, head of the water resources department in Pailin, said yesterday that rain from parts of Thailand have also contributed to the overflow of the river.

“It occurs near the border with Thailand and the water comes from Thailand when it’s raining,” Mr Lyhong said. “We are suggesting villagers coordinate with their local authority in case they need help.”

The ministry also said that one man died in Sihanoukville city after a billboard hit him due to strong winds. 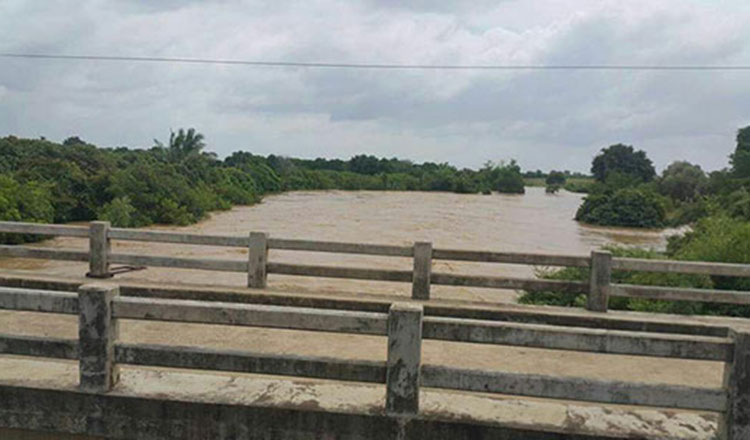 A 56-year-old factory worker died during a storm in Sihanoukville city on Saturday as he was riding his motorbike home when a billboard collapsed, causing fatal injuries, the ministry said.

Meanwhile, a portion of National Road 4 leading to Sihanoukville city was temporarily closed due to flooding yesterday evening in Kampong Sela district.

“We are experiencing heavy rain in the city, so people – especially fishermen – must be careful during their daily activities,” Mr Chamroeun said.

The Ministry of Water Resources then issued flood alerts in some provinces, while dam gates in Kampot and Battambang were opened to release excess water.

According to a National Committee for Disaster Management report, natural disasters killed at least 103 people, injured 120 and damaged thousands of houses, crops and infrastructure in 2017.