Following a video circulated on social media claiming that Thai authorities are actively targeting Cambodian migrant workers, the Cambodian embassy in Bangkok released a statement on Friday dismissing the video as “fake news”.

The embassy said that migrant workers in Thailand should remain calm and not be affected by an old video of Thai authorities conducting immigration check-ups on foreign workers.

“The video was taken in 2015 and it was posted again to spread fear among migrant workers,” the statement said. “We appeal to all Cambodian migrant workers in Thailand to stay calm and work as usual.”

“Those who do not have legal documents, please come to the Cambodian embassy so to work legally in Thailand,” it added.

Sin Namyoung, an official in charge of migrant workers at a holding centre in Poipet city, said yesterday that 1,641 migrant workers have been deported through the city’s international checkpoint since June 30, the deadline imposed by Thai authorities for migrant workers to obtain legal papers.

“A lot have returned recently,” she said. “Some of them fear getting arrested by Thai authorities.” 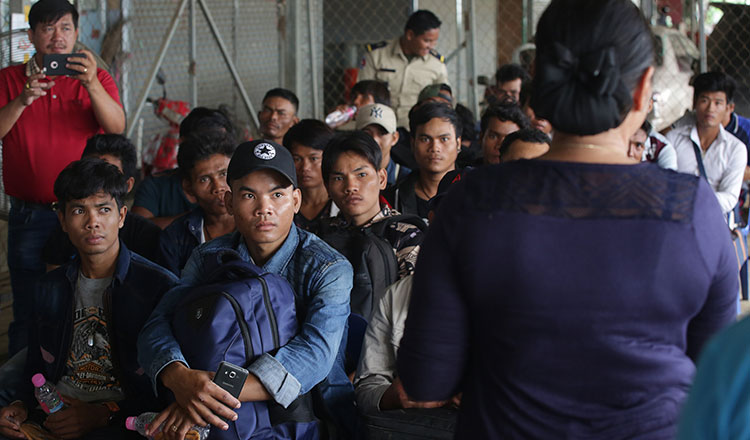 She added that last month, 6,932 illegal migrant workers, including 672 women and 173 children aged under 18, were deported from Thailand.

Last year, Thai authorities began cracking down on undocumented workers, leading to a mass labour exodus that resulted in both governments coming to an agreement to allow illegal workers to remain in Thailand while awaiting legal papers.

Since the legalisation process began, Thai immigration officials have said that 1.18 million migrant workers have registered with Thailand’s Labour Ministry.

De Thehoya, a programme officer with the labour rights group Central, said yesterday that the agreement between the Thai and Cambodian governments has been successful in legalising workers and also allowing those deported to get paperwork before returning.

“They can come back via company recruitment set in place by the MoU signed by both countries, which has been implemented in Thailand as a new law,” Mr Thehoya said.

Thai authorities deported more than 13,000 Cambodian migrant workers last year, according to a report from the National Police issued in February.​ All the deportees had overstayed their visas or crossed the border illegally. Some of them said they had been cheated by recruitment agents who promised them work in Thailand.

Parties in capital show of strength