A lawmaker for the ruling CPP has lashed out at a group of officials who used vehicles with police and military number plates for election campaigns in defiance of the law.

Sar Sokha, a CPP lawmaker candidate for Prey Veng province, posted a message on his Facebook page yesterday and attached three photos of police and RCAF cars with the CPP logo pasted on them.

Mr Sokha asked why a handful of police and military officers kept using state vehicles with police and RCAF number plates to participate in election rallies in defiance of the government’s orders.

Interior Ministry spokesman General Khieu Sopheak said that he was aware of the incidents. An investigation would be conducted into whether it was a misunderstanding or an illegal activity, he said.

“Sure, the ministry will investigate it,” he said. “There could be three possibilities. It could be an intentional act by CPP members who are devoted too much to the party. Or they probably did not understand that it’s a mistake to do so. Lastly, I think the opposition party’s spies do it intentionally.” 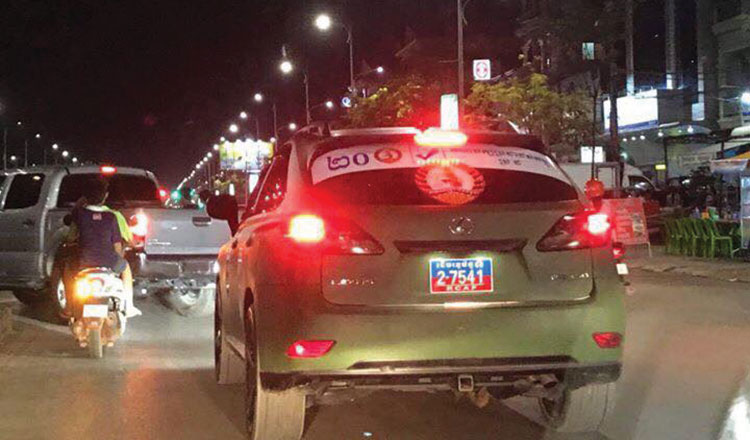 Gen Sopheak said that opposition groups and some civil society members would use it as a pretext to blame the CPP for alleged irregularities after the election results were announced.

Gen Sucheat said action was being taken to track down who the officers were and what unit they worked for.

“I have already contacted commanders of the military units to identify the persons. They cannot be tolerated. Legal action must be taken against them,” Gen Sucheat said.

National Election Committee spokesman Hang Puthea said that the NEC was conducting an investigation as well. “The NEC has collected all the photos as evidence,” he said. “Those who use state vehicles to take part in election campaigns will have their right to vote revoked. If he or she is a lawmaker candidate, they will be disqualified from standing in the election.”

Mr Hun Sen said that officials had to treat all political parties fairly and equally and not use vehicles which belonged to the state for campaigns.