No one was killed or injured in the 3.30am blaze in an area where narrow streets made it hard for fire trucks to tackle the flames.

“The houses were made of wood which caused the fire to spread quickly,” said Prum Yorn, director of the municipal fire department. “The weather was windy and the road was so small that the firetrucks found it hard to battle the fire.”

The initial conclusion was that the fire was caused by an electrical fault in villager Sin Yen’s house while he was sleeping.

Mr Yorn said firefighters used 32 trucks from the Phnom Penh municipal police department, the Ministry of Interior, Chroy Changva district office and the Russey Keo district office to battle the inferno over the course of about two hours.

“I wanted to extinguish the fire immediately at Mr Yen’s house, but it was too late to help him,” he said. “I couldn’t even save my own property.”

Chom Sot, whose house was gutted, said that most of the people affected were from Vietnam. Most of the houses were made of wood, she noted. 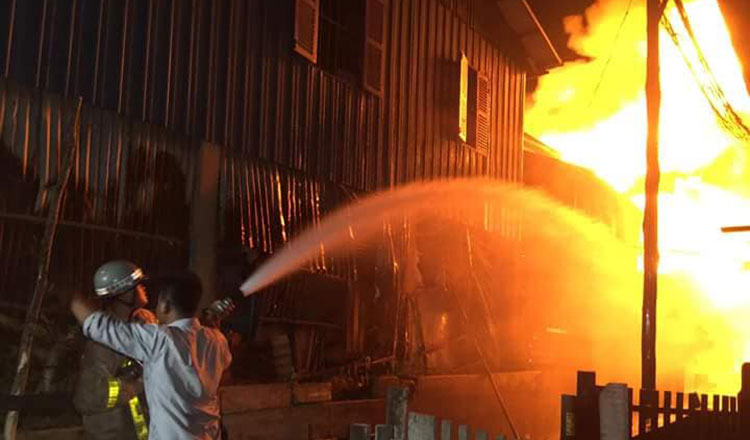 “When I woke up, I saw the fire had already reached the house next to me,” she said. “It started in silence without an alarm to get us out. Everything was burning in the blaze.”

“We are very sad to see our house and property destroyed so quickly by the fire,” she added.

On Monday, more than half of the Meikodo Cambodia factory in Phnom Penh’s Por Senchey district was destroyed in a blaze caused by an electrical fault.

Mr Yorn said there had been 48 fire incidents in Phnom Penh this year. One person had died and 12 were injured. According to the National Police, there were 514 fires across the country last year. Twenty-two people were killed and 128 injured.