Sen David and Or Sreypich / Khmer Times No Comments Share:

More than 100 workers at the Pontus Footwear factory in Takeo province’s Tram Kak district fainted yesterday, just one day after 249 workers fainted due to exhaustion and low blood sugar, a health official said.

Nut Sinat, director of the health department in Takeo province, said a total of 358 workers were treated in hospital over the past two days after fainting in the factory. All had recovered.

“Workers were sent to hospital on Monday. On Tuesday, more of the workers fainted and received treatment in hospital,” he said. “They were exhausted, suffered from low blood sugar and were in shock, but they are back home now.”

He said the reasons for them being in shock were seeing co-workers fainting and their own health conditions.

After the Tuesday incident, labour advocacy group Central called on the Labour Ministry to send inspectors to Pontus Footwear to look into the health, safety and working conditions of workers. It said the first mass fainting occurred as a result of workers’ shock at seeing a colleague bleeding. 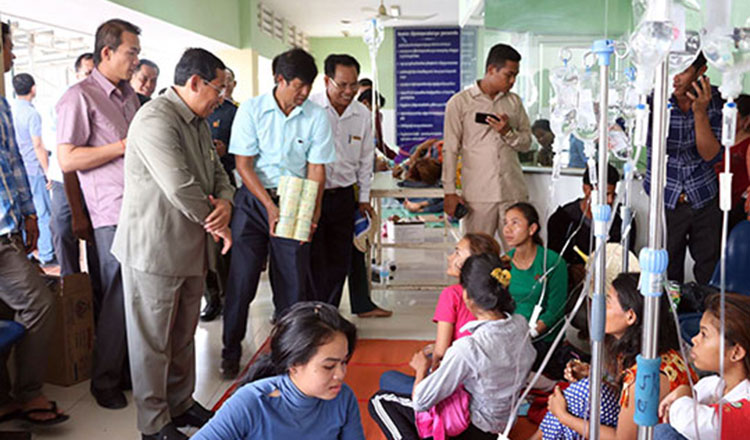 The director of the department of labour in Takeo province said the second mass fainting was triggered when workers panicked after seeing a female worker receiving an intravenous drip.

Tola Moeun, Central’s executive director, said the factory should have taken preventative action before requiring people to resume working to ensure that no further fainting occurred.

The fact that several hundred more workers fainted yesterday indicated that no such action was taken, he said.

“It is extremely sad to see that neither factory nor the authorities took enough preventative measures to protect workers,” he said.

According to Central, incidents of mass fainting are extremely prevalent in Cambodian factories, fuelled by high working temperatures, poor ventilation and malnutrition stemming from low wages.