Anti-drug police on Sunday arrested two drug traffickers who are believed to be part of a syndicate whose three top guns were also nabbed recently.

Anti-drug police chief Major General Loek Vannak identified the duo as Sean Khouch, 32, and Sok Sola, 27, who were caught with nearly 27 kilos of drugs during a raid on a rental villa in Sen Sok district’s Phnom Penh Thmey commune.

Maj Gen Vannak said the three leaders had been arrested on June 26 while transporting 120 kilos of crystal methamphetamine through the Cambodian-Laotian border in Stung Treng province. The three were identified as Chheav Thearo and Hem Savorn, both 35, and Theav Tongheng, 37.

All three are being detained in Stung Treng prison pending trial and face life terms if convicted.

Maj Gen Vannak said that all five arrested men belonged to a syndicate which smuggled drugs from Laos to stock and distribute in Phnom Penh and other provinces.

“The two were arrested following interrogation of the other three and we seized 22,857 grams of ketamine and 4,003 grams of ice from them during the raid,” he said.

He said police had also arrested another suspected ring member Khin Mab, 25, during a raid on a rental villa in Kantouk commune on Saturday.

He added that they seized 69 small packages and 20 large packages of crystal methamphetamines weighing more than 15 kilos, drug processing equipment and other related materials from the villa.

The accused are now being detained for questioning and will be sent to Phnom Penh Municipal Court after investigations are over. 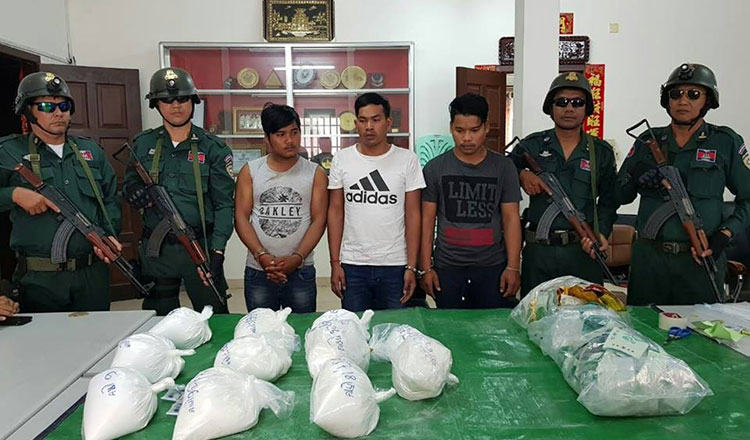 “They were arrested while transporting the drugs by motorbike from the Cambodian-Thai border in Koh Kong Province. The drugs were meant for sale to drug-using fishermen in Sre Ambel district,” Maj Visal said. “After their arrests, police seized three big packages of crystal methamphetamine weighing 7,745 grams and a motorbike.”

He added that both were being detained for questioning and will be sent to Koh Kong Provincial Court today.