You’ve probably passed by walls on the wide and narrow streets of Phnom Penh that are painted with different figures, shapes and colours – some made you stop and smile, some probably just received displeased stares. This is street art – a kind of visual art that takes artworks outside traditional venues. And though it has not fully burgeoned in the Kingdom yet, it’s surely starting to make the art scene more alive than it ever was – thanks to street artists, like David Myers aka Davido, who continuously take their creative pursuits into the streets and public spaces for people to see. The 20-year-old mural painter shares what drives his artistry with Eileen McCormick.

Good Times2: When did you start to get into art? What inspired you?

Davido: Well, I started drawing since I was young. And then, I started exploring painting when I was about seven. I’ve also learnt a lot about art theories. You know, colour composition and all the stuff from famous artists like Vincent van Gogh. I was also fortunate to take art classes in an international school.

Good Times2: Did you realise that you had more knack on art than your peers? Was this something you went to university for after high school?

Davido: Yes, I got a lot of good and positive feedbacks from my peers. That definitely boosted my confidence. I was just starting that time, so the appreciation I got drove me to get better and work harder on my craft. After I graduated from high school, I enrolled in architecture in university for one year, but I just didn’t feel like it was my thing. I decided to drop out and just have been focusing on art ever since.

Good Times2: How will you describe street art?

Davido: I’ve been painting murals for four years now. I go out on streets and put my work on the walls. I really like this concept because with galleries, it’s like people still have to come to see art. With street art and public art, meanwhile, the works are already there for people to witness. Over time, what I was putting on walls evolved. I started to realise that what I paint can actually have impact on the people who see them.

Good Times2: What do you like to use as your subject matter for the paintings?

Davido: I’ve always been into animal conservation. So I put heavy focus on animals in Cambodia, using them as subject for my murals. Like this year and the previous year, there’s a lot of younger Cambodian mural artists popping up. It’s great to see that they understand that they can actually relay a message through painting in public spaces. Using animals as my subject, it’s like a reminder that these animals are here. So, you know, we should actually think about them. We also have this idea that the characteristics of these animals are related to human beings. For example, a tiger is associated with strength and power. In Southeast Asia, people get tattoos of tiger to get the strength of the animal. But then it’s quite ironic that people are giving emphasis on the strength of the tigers, but when you go to the wild, there are actually no tigers there because they’re all gone.

Good Times2: Are there cultural challenges for street artists in Cambodia?

Davido: As long as you ask permission, it should be okay. Also, it’s what you are painting that creates awareness or issues. Street art is relatively new here, been around for just about 10 years or so. So for the artists here in Cambodia, we have to make our art more aesthetically pleasing and a bit more realistic because Cambodians like arts that depict Apsaras or the Angkor Wat. They’re not really fond of the abstract.

Good Times2: Has history changed the forms of art in Cambodia? If you compare the French colonial time, post-Khmer Rouge time and the present day, how has art evolved?

Davido: Obviously, I can see how the war influenced artists and art forms. A lot of art forms died, especially the traditional ones, during the genocide. I had the opportunity to work with Cambodian Living Arts and saw how they worked to preserve some of the traditional instruments. At one point, there was this instrument that only one person knew how to play. He was trying to teach as many people as possible so that they could preserve such musical instrument. Before the war, people recognised and appreciated art. It was such a big thing. But because of the tragic circumstances, people had to deal with survival more than art, so it was thrown into the background. But I believe it’s making a great comeback now.

Good Times2: Do you sell your work?

Davido: I do sell my works. I’m a part of Kbach Gallery, the first street art gallery in Cambodia, which just opened last year. Kbach Gallery is on street 178 which is on the south of the National Museum.

Good Times2: Does Kbach Gallery work with street kids and teach them about art?

Davido: We’ve done a lot of work with Cambodian Children Fund like life-sharing and stuff for children’s events. It’s fun to let kids see the works of art and interact with the artists. Recently, Kbach had this event at the Factory for Khmer artists. It was a big art competition and younger artists were invited to join. The winner gets a thousand dollars in cash prize as well as a contract with the gallery. 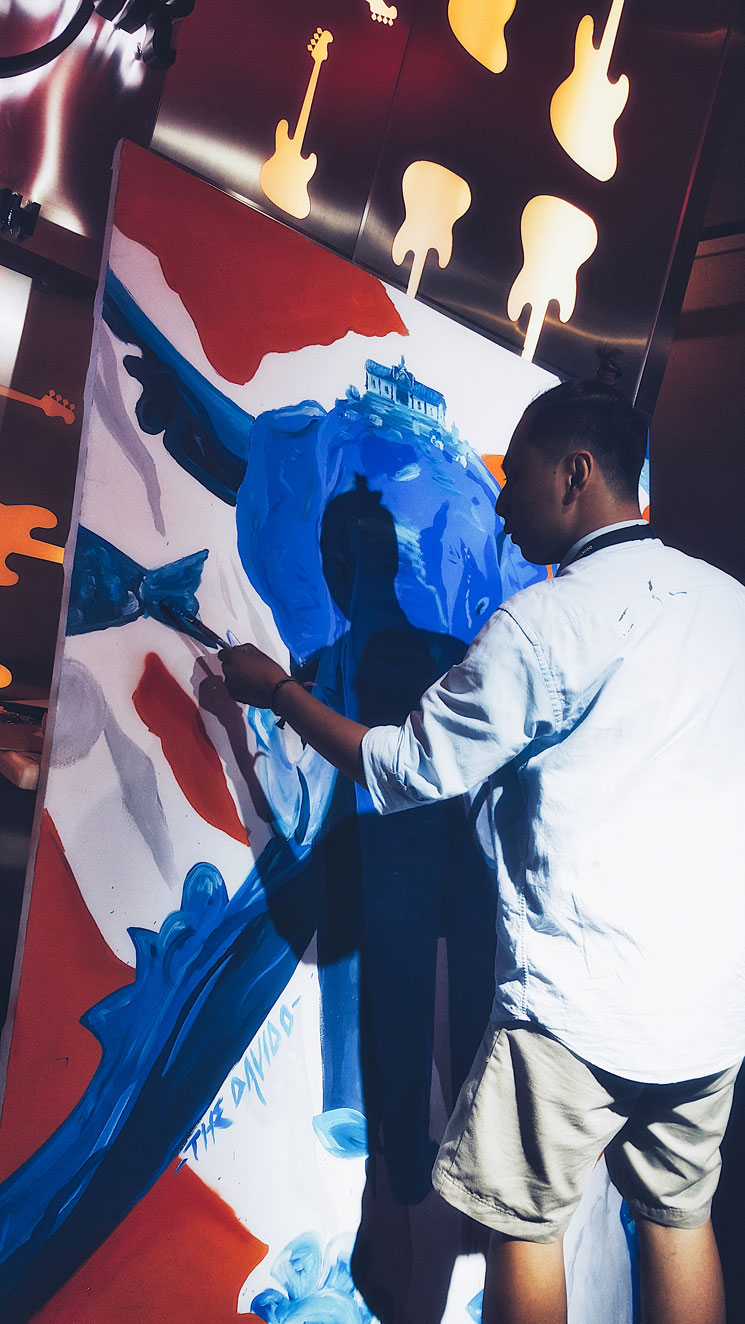 Good Times2: Have you travelled outside of Cambodia to do street art?

Davido: Back in 2015, there was this festival in Europe. They invited five cities around the world – Seoul, Phnom Penh, Detroit, a province in Netherlands, and Rio from Brazil. Each city had 21 artists and I was invited to paint two walls there representing Phnom Penh. This year, I’ll be heading to Indonesia so hopefully I will be doing some work there. I’ll be glad to join the Indonesian art scene.

Good Times2: Will you be pursuing a degree in art?

Davido: I’ll actually be getting my Bachelor of Arts in Literature Education. It’s another kind of art, as art has so many types. I do visual art, which offers something visible. For literature, it’s like written art and it expresses ideas through poetry, stories, tales. In a way, it’s like art interpretation. With written ideas, you have to think of stories which you can actually use to build your own world. With visuals, it’s already there. But you have to figure out what the art means.

Good Times2: Do you have any advice for youth in Cambodia who want get into street art?

Davido: You know, just go out there. There are so many events related to arts happening every week. So just go out and experience it. Go to exhibitions, go to musical performances and simply join the drawing team which you really like. Three or four years ago, there were only a handful of art events being held. And now, it’s popping up everywhere.

For younger kids who are passionate about arts, never do it for money. Obviously when you start, you are going to spend your own resources. But keep in mind that it’s passion that will give you motivation to uphold the craft. 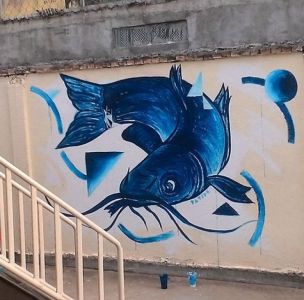 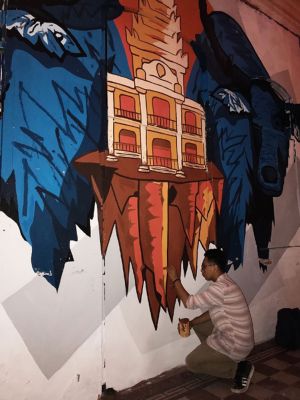 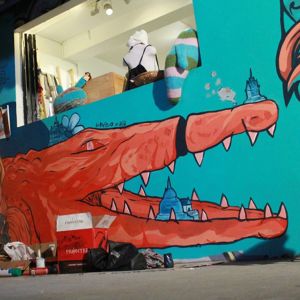 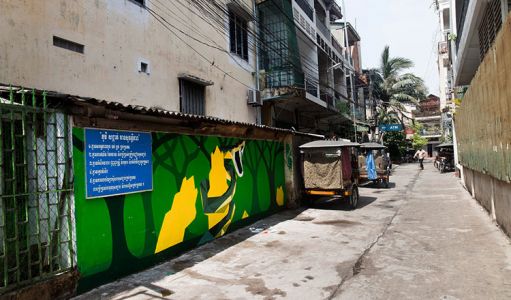 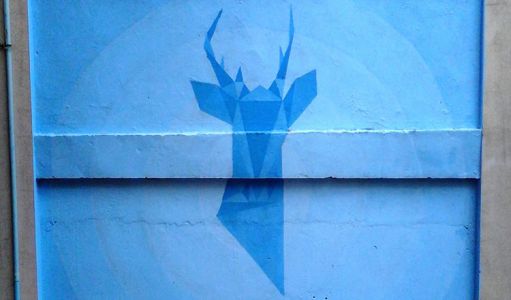 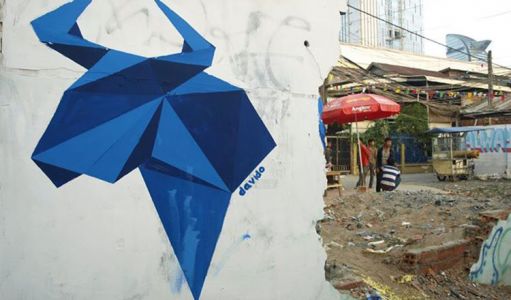 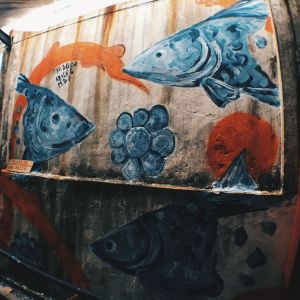 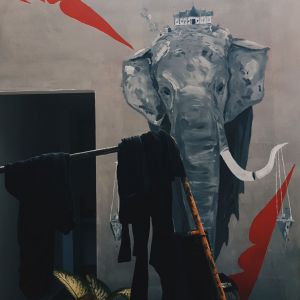 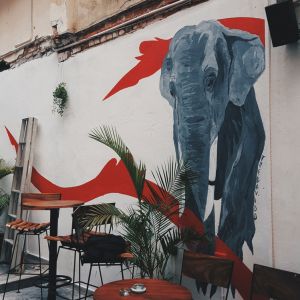 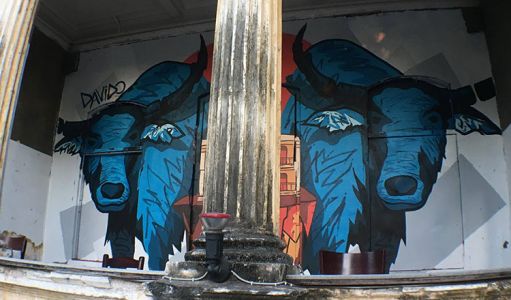