Home - A confident man on stage

A confident man on stage

Weeks ago, debaters and public speakers rocked the stage at the Institute of Technology of Cambodia. Two debating teams and four public speakers all showed their knacks on expressing their views on socially-relevant topics. They all did well, but it was Suy Linpao who stood out and made a great mark. As the audience and his fellow speakers cheered, Linpao was awarded Best Public Speaker and Best Debate Team during The Perspectives Cambodia Season II.

A native of Kampong Thom, 19-year-old Linpao shared that he learned to love public speaking when he was still young, crediting his fondness of watching Cambodian leaders and politicians speaking on stage.

“When I was in Grade 3, I dreamt of becoming a Cambodian prime minister. When I grew up, I started to realise that all I want is to contribute something good to my country,” Linpao recalled.

Even when he has always imagined himself speaking in public, Linpao admitted that he lacks confidence when being put in actual speaking act. But his dreams are big, he said, and he won’t let his fear win over those dreams. So he practised and engaged himself into activities that can help him build self-confidence. When he thought he was ready, he joined a debate competition earlier this year. Unfortunately, he failed to reach the finals.

“We failed in the competition. I believed I did not strive hard enough during that time that’s why we lost. I was a little disheartened. Luckily, a former participant of The Perspectives Cambodia encouraged me to join its second season. I was not actually very interested in joining at first because I thought the competition will be using the English language. But I still submitted my form on the last day of the application.”

Linpao, with his failure in the first debate competition still in his mind, felt that he needed to try harder, give more focus to achieve what he wants. He examined himself to find what he needs to improve. Linpao focused on refining his coordination with his debate teammates, commitment to his speech and time-framing.

Even so, Linpao still felt that he was the weakest member of his team.

“I started from scratch, from zero. I lacked confidence. I did inappropriate facial expressions and my delivery was kind of strange for a debate. But I didn’t want to disappoint my coaches. I strived hard to practice even when I was alone,” said Linpao. He added that he drew inspiration from his family and friends and his coaches who were all very considerate and helpful.

All his hard work paid off eventually when he was also selected to participate in the public speaking competition, aside from the debate. He admitted that he felt the pressure on his shoulders – with the two competitions and school works coming all at once.

“I have to ensure both my family and myself that I will still perform well in English school, ready for all the assignments in the university, and do good in the two contests. It was very tough, but my coaches were there to give me pieces of advice.”

“My university schedule is not fixed. Whenever I was available, I took all that time to discuss with my teammates. It was four months straight of juggling everything,” he added.

He recalled that after consulting his chosen topic with his coaches, he had to find related studies to enhance and broaden his approach on the speech. He opted to tackle “Grabbing Opportunities to Change Destiny“ in his five-minute speech.

“It is rare to have access to information here. Therefore, I had to find details from the people who work on the field. Some of them were really approachable and helpful, while some were too busy. Communication is one of the biggest obstacles in finding sources. Time was a problem, too.”

But Linpao learned that the obstacles and hardships he encountered in his journey as public speaker are part of his growth. His experiences taught him to view issues in different ways – taking and understanding all sides. 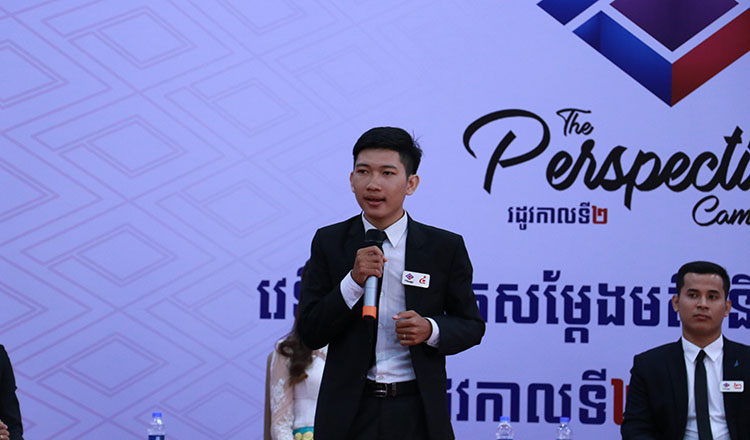 After winning both in public speaking and debate, Linpao credited his triumph to his coaches and to his debate teammates who kept pushing him up when he didn’t believe in himself. He also expressed his message to Cambodians regarding the upcoming election, which was this year’s debate topic.

“Cambodians cannot only listen to propaganda of politicians. We should be critical thinkers when voting. Leaders should also listen to the voices of the Cambodians, understand their needs.”

“You need to start preparing and practicing as early as now. You can’t do all the preparation two weeks before going up on stage. That would only cause you fatigue and exhaustion during the day of the competition.”

Linpao said he wants to become a mentor’s assistant in the next season of the competition so he can help contestants to be well-prepared and confident.