More than 1,000 textile workers from a footwear factory in Daun Keo City yesterday rallied at the Takeo Provincial Hall to demand officials intervene on their behalf to get their unpaid severance packages.

The workers said that the factory was supposed to pay them a severance package upon the conclusion of their six-year contracts.

Protests began on Monday when the workers first descended upon their former place of employment, a factory operated by Takeo Shoes Cambodia. On Tuesday, the workers protested in front of the provincial labour department and yesterday they hit the provincial hall.

Worker Meas Srey Oun said yesterday at the provincial hall that Takeo Shoes Cambodia was not upholding its obligations.

“We worked there for many years, we need our severance pay and we will return and return again,” she said. “We are afraid that our former employer will not pay our severance.”

Takeo provincial Governor Ocuh Phea said that he met with the workers to find a solution for them and noted that the complaint has been received and that provincial officials are handling the case. 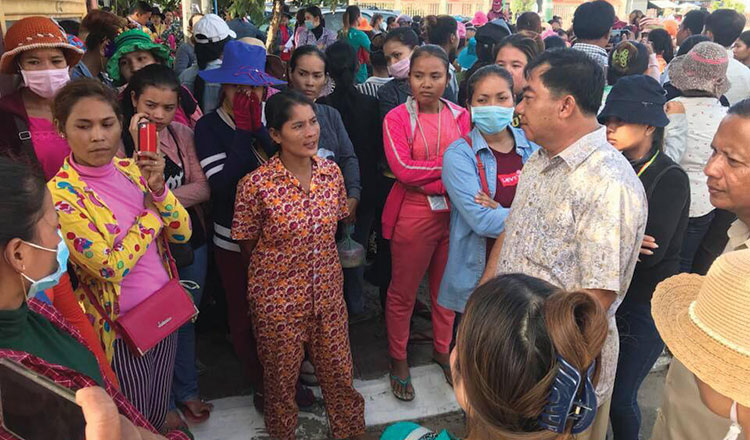 “First, we want them to go back home without any protest and we will meet with their employer for a solution,” Mr Phea said.

Yi Sokhorn, another worker, said that they were not coerced to rally. Instead, Mr Sokhorn said that they took it upon themselves to fight for their missing pay.

“Unions didn’t help us to rally, we all came together to demand our severance pay,” he said.

In March, the government said it was prepared to pay out $4.6 million to about 4,100 workers whose bosses fled without paying their wages.

Since then, thousands of workers who were abandoned by their employers have received compensation from the government.

The government also moved to amend article 89 of the labour law regulating severance pay for workers.

Following the amendment, the Garment Manufacturers Association in Cambodia said the move could financially burden employers by forcing them to pay out severance all at once rather than in instalments.

In a statement after the amendment, GMAC said amending article 89 protects workers, but “will create a new degree of financial burden for the employer and possibly other human resource management challenges”.

“We would like to express our concern and ask the government to please carefully consider the issue,” the statement added. “We strongly suggest that employers pay the compensation in phases.”