Officials from the Ministry of Interior, Ministry of Justice, along with teachers and students, attended the event.

“It was a celebration under the theme ‘Let’s be together for our drug-free community and life,’” Mr Sovathana said.

He said those in attendance included Mok Manny, an undersecretary of state at the Justice Ministry, Stung Treng Governor Mom Saroeun and General Mak Chito, deputy secretary-general of the National Authority for Combating Drugs.

“There were also about 1,350 participants from different taskforces, provincial departments, commune councils, as well as teachers, students, and the public,” he added.

Mr Sovathana said that the event served as a message to students about the dangers of drugs. 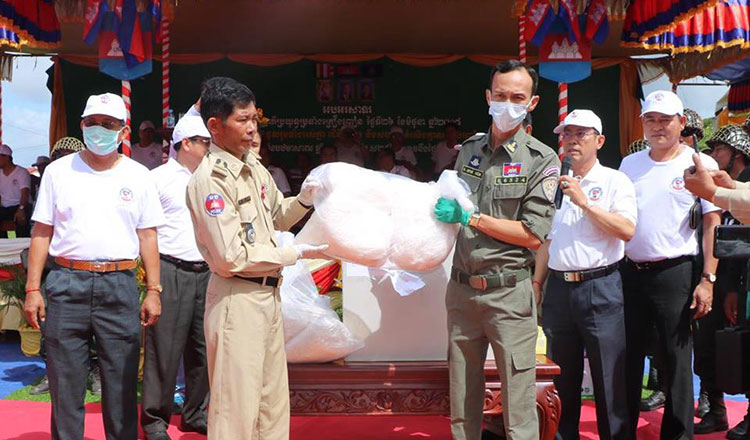 “In addition to burning the drugs, we also included a message on the impact of drugs in order to bring people together to join hands in the fight against drugs,” he said. “The timing for the event was not irregular, the court finished multiple cases and that means we can take the drugs for destruction; we cannot destroy the drugs being used in active cases at the court.”

He noted that the drugs burnt yesterday included powdered methamphetamine that weighed more than 30 kilos, along with 1,933 pills of meth.

Kon Kimsun, deputy chief of the provincial police anti-drug bureau, said that most of the drugs destroyed were smuggled in from neighbouring countries, especially Laos.

“For the drugs destroyed, they were from more than 40 cases, including three big cases,” he said.