People can now board a train in Phnom Penh and travel all the way to Poipet, in the border with Thailand, after the last section of the western rail line was officially inaugurated yesterday.

Renovation work on the western rail line, which covers 386 kilometres and connects the capital with the Thai border, has now officially concluded, making it operational for the first since it was destroyed during the country’s civil war.

The last section, stretching for 166 kilometres from Pursat province to Phnom Penh, was launched yesterday, and passengers will be able to use it free of charge until the end of July.

The first section of the rail line, connecting Poipet and Banteay Meanchey province’s Serey Sophorn, was inaugurated in early April. The section stretching from Serey Sophorn to Battambang was put into service later that month, while the one from Battamabang to Pursat entered service in May.

Transport Minister Sun Chanthol, speaking yesterday at the launching ceremony for the last section of the rail line, called the day “historic”, adding that this will be the first time in 45 years that the rail line is operational.

He explained that on Friday he will meet his Thai counterpart to discuss and finalise a memorandum of understanding that will specify the rules for the transportation of goods by train across the border between Cambodia and Thailand. 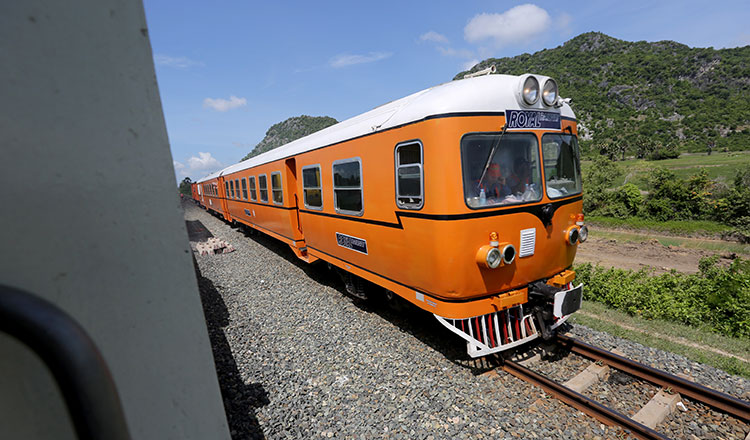 “We have already connected the railways in Cambodia and Thailand,” he said. “However, passengers cannot cross the border by train yet because there are three points in our railway agreement that we still haven’t managed to agree upon.

“Once the agreement is signed, Cambodians will be able to take the train from Poipet to Bangkok, and then in Thailand they can board a train all the way to Singapore,” he said.

Royal Railway, the company in charge of managing the railway network in Cambodia, will now purchase modern train engines and carriages to further improve and modernise the line, the minister said.

Sin Chanthy, president of the Cambodia Freight Forwarders Association, said opening the line will reduce traffic congestion in the capital.

“Re-opening the line will alleviate traffic problems in Phnom Penh. Passengers will also be able to travel more cheaply, as trains are generally a cheaper mode of transportation,” he said

“My hope is that a freight service will be launched soon so that it can also lower costs for transportation companies.”

Chan Kimleng, director of the Railway Department, told Khmer Times fares for the rail line have yet to be decided, adding that the government is still negotiationing with Royal Railways to set prices.

A one-way ticket to travel from Phnom Penh to Sihanoukville by train now costs $7, according to Royal Railways.