Seventy construction workers in Svay Rieng province’s Bavet staged a protest yesterday after the labour agency that found them jobs failed to pay their salaries, totalling more than $30,000 over four months, as agreed.

The labourers, working on a building in Bavet, stopped working in protest. They said the agency had not paid their wages for four months and $31,939 was owed in total.

Sam Nang, a construction worker, said the labour agency agents were Heng Tay and Nith. The pair had exploited their labour without paying wages, he said.

“We came to work in March this year and the agents always promised to pay to us but we kept waiting day after day,” he said. “That is why we are protesting.”

He said the owner of the building had already paid their wages to the agents, but the brokers did not pay the workers and likely fled with the money.

The affected workers are from Svay Rieng, Kampong Cham and Battambang provinces. The construction owner is to meet them to seek a solution.

Yan They, secretary of the Building and Wood Workers Trade Union Federation of Cambodia, said it was not the first time that construction workers had encountered unpaid wages from construction labour agencies. 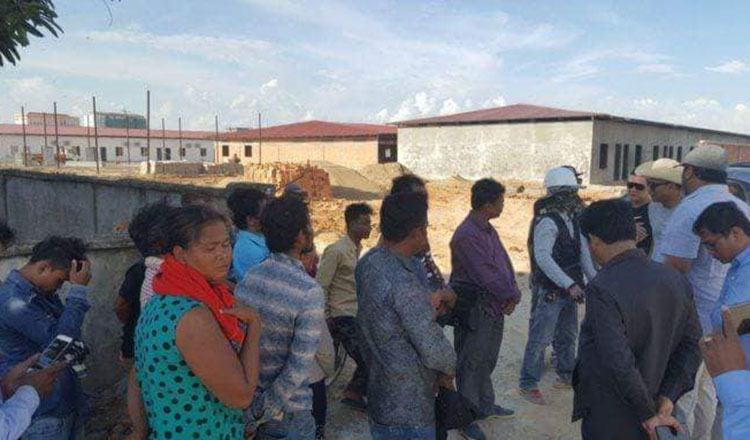 “We always get complaints from construction workers over unpaid wages,” he said.

Last year, the union wrote to Prime Minister Hun Sen to suggest he meet workers in the industry because they needed the government to provide benefits for them.

The plea came after Mr Hun Sen met garment workers in August and handed out the latest in a series of benefits for workers in the sector. At the time, workers from other sectors urged him to meet them, too.

The building union said yesterday that workers from sectors the union covered had many difficulties such as not having a minimum wage. Workers did not have enough safety protection and still did not get benefits from the National Social Security Fund.