This auspicious day is celebrated to commemorate the legendary formation of the first Korean state of Gojoseon in 2333 BC, and is traditionally regarded as the date of the founding of the Korean people.

Speaking at the embassy yesterday morning, South Korean Ambassador Park Heung-Kyeong praised the strong bilateral relationship between South Korea and Cambodia, as this year marks the 23rd anniversary of the re-establishment of the diplomatic ties between the two Asian countries.

“In February this year, Prime Minister Hun Sen visited Seoul in South Korea and had a fruitful meeting with His Excellency Moon Jaein, President of the Republic of Korea,” Ambassador Park said. 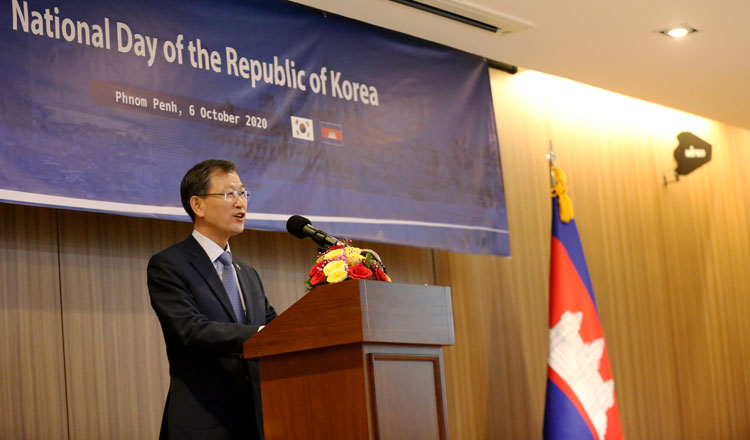 “Both leaders praised the rapid strengthening of bilateral relations and the remarkable achievements made throughout various fields of cooperation,” he added.

According to the Ambassador, since Cambodia and South Korea re-established their diplomatic relations in 1997, bilateral trade has increased 19 times from $54 million to $1 billion, and people-to-people exchanges have increased 280 times from 1,400 to 400,000. South Korea also ranks second overall in terms of investments in Cambodia, playing a major role in the Kingdom’s leading industries such as garment, agriculture, and finance.

“In recent times, South Korea has spearheaded the growth and expansion of the financial sector in  Cambodia through mergers and acquisitions with major financial institutions and the Korea International Cooperation Agency’s grant aid project in collaboration with the National Bank of Cambodia to enhance the national retail payment system of the Kingdom,” Ambassador Park added.

“The cultural exchanges between us are also vibrant. Cambodians love and enjoy ‘Hallyu’ or Korean Wave popculture such as K-pop, K-drama and K-food. More and more Cambodians are enjoying learning the traditional Korean martial art of Taekwondo and the Korean language,” Ambassador Park said.

With Cambodia being one of the major partners in the New Southern Policy, South Korea is doing its best to support Cambodia to combat the ongoing COVID-19 pandemic, one the worst public health and socio-economic crisis the globe has ever witnessed, Ambassador Park said.

“Korea has assisted Cambodia and neighbouring countries in the fight against COVID-19 by providing medical equipment such as Korean-made testing kits and mobile testing walk-through booths. South Korea has already provided $100,000 worth of COVID-19 testing kits and $200,000 in cash funds to Cambodia through emergency humanitarian support,” he said, adding that his country has also committed to provide medical devices and equipment worth $500,000 to enhance the detection capacity for COVID-19 in Asean countries.

Presiding over the ceremony was Hang Chuon Naron, the Minister for Education, who commended South Korea for her success in combating COVID-19 and offered his appreciation to its government and people for their assistance to Cambodia during this challenging  time.

“Despite domestic challenges to bring COVID-19 under control, South Korea has given support worth $300,000, which includes testing kits,” the minister said.

“On behalf of the government, I would like to thank the South Korean Embassy in Phnom Penh and related agencies for their endeavours to promote friendship, bilateral ties and fruitful cooperation between our two countries,” he added.

At the end of the event, Chuon Naron and Ambassador Park Heung-Kyeong, both martial art practitioners, simultaneously smashed a pair of punching boards bearing the word “COVID-19” as a symbol of the two nation’s great determination to defeat the invisible enemy.

“South Korea, as a true friend, is committed to helping Cambodia overcome the COVID-19 crisis and achieve economic development in the spirit of co-prosperity stated by the New Southern policy,” Ambassador Park said.

National Foundation Day of the Republic of Korea

Cambodian U-19 team will not play in Uzbekistan this year