Kandal provincial governor Kong Sophorn has reported that Vietnamese soldiers have upgraded four more tents to “solid structures” making a total of 10 along the border between Kandal and Vietnam’s An Giang province.

The issue was first reported in August after provincial police chief Major General Chhoeun Sochet said to Sophorn that the Vietnamese side was replacing tents with new structures.

Maj Gen Sochet said at the time of discovering the concrete structures, that they were five metres long and three metres high with corrugated tin roofs.

Sophorn said yesterday that Vietnamese soldiers had upgraded tents at lowland areas which could be flooded during the rainy season.

“Their six structures were set up with concrete pillars and a corrugated tin roof, while four others were made with bricks,” Sophorn told Khmer Times.

He said Cambodian authorities are still insisting that Vietnam remove all solid structures and tents along the undemarcated areas in Loeuk Dek and Koh Thom districts. However, the Vietnamese side have asked for more time, in order to prevent the spread of COVID-19.

On May 13, the Ministry of Foreign Affairs sent a diplomatic note to Vietnam to remove the 31 structures.

In response, Vietnam’s Ministry of Foreign Affairs said the tents were set up along the border to “prevent and control cross-border travel” during the pandemic. It said when the pandemic comes to an end, the tents would be removed.

However, Vietnam said the temporary tents are located “completely within the Vietnamese side” in accordance with the factual management line measured and agreed upon by the Special Working Group of the Joint Commission on Land Border Demarcation.

Ministry of Foreign Affairs spokesman Koy Kuong said yesterday the ministry is working with the Cambodia Border Affairs Committee on the issue.

“The ministry has sent the report [on the structures] for verification by the Joint Commission on Demarcation and Adornment for Land Boundaries,” he said. “We need them to first determine the exact location of the structures.”

As of yesterday, Kuong said the ministry is awaiting an official response from the committee.

Var Kimhong, Border Affairs Committee chairman, could not be reach for comment yesterday but he has told local media that the committee has yet to take action.

Interior Minister Sar Kheng in June also sent a letter to Kimhong, asking the committee to inspect reports that Vietnam has installed the tents along the border between the two nations. However, Kimhong has told the ministry to send the committee the coordinates where the tents were located.

The National Police’s Border Police Department, has reported that since the outbreak of COVID-19, Cambodian authorities found nearly 300 tents set up by the Vietnamese along the border areas in several provinces such as in Kandal, Takeo, Prey Veng, Svay Rieng, Kampot, Tboung Khmum, Ratanakiri and Mondulkiri. 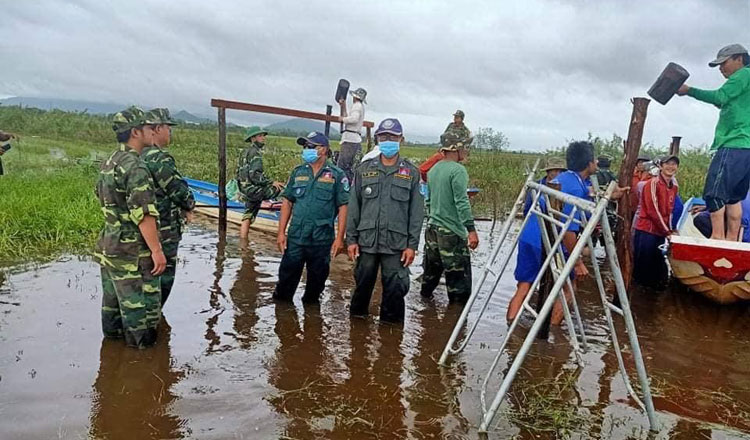 Sros, who previously suggested that the government send a diplomatic note to Vietnam over the border issues, said that Vietnam could expand its border at undemarcated areas.

“I urge the government to ask Vietnam to leave the undemarcated areas and not delay anymore,” he added.

The Kingdom expects to set up a total of 371 border markers along the border with Vietnam, and so far both sides have installed 315 border markers, or 84 percent. The two sides are negotiating to reach an agreement on the remaining 16 percent.

The topographic maps were drawn up based on data from the 1:100,000 scale maps printed during the French colonial era, except in some areas where land was swapped between the two nations.

The map is part of demarcation protocol signed in Hanoi on October 5, 2019 as well as the supplementary treaty to the 1985 Treaty on the Delimitation of National Boundaries and the 2005 Supplementary Treaty.