Home - Sweden win to go through

Sweden win to go through

ST PETERSBURG (Reuters) – A deflected shot from Emil Forsberg gave Sweden a 1-0 victory over Switzerland in a dull World Cup round of 16 match in St Petersburg yesterday, sending the Swedes through to the quarter-final.

Switzerland had the lion’s share of possession but were toothless in attack, and bowed out in dispiriting fashion after registering four shots on target over 90 minutes, none of which unduly tested Robin Olsen in the Swedish goal.

Boos and whistles rang around the St Petersburg stadium as early as the 25th minute, with both Swedish and Swiss fans alike left irate by the lack of quality and attacking verve on display.

The teams went into the interval locked in a goalless stalemate, with Sweden just about shading their opponents in terms of the quality of the few clear chances created.

Marcus Berg forced a fine save from Swiss goalkeeper Yann Sommer in the 27th minute, and Albin Ekdal squandered an excellent chance when he volleyed over the bar from 12 metres out after getting on the end of a cross from Mikael Lustig. 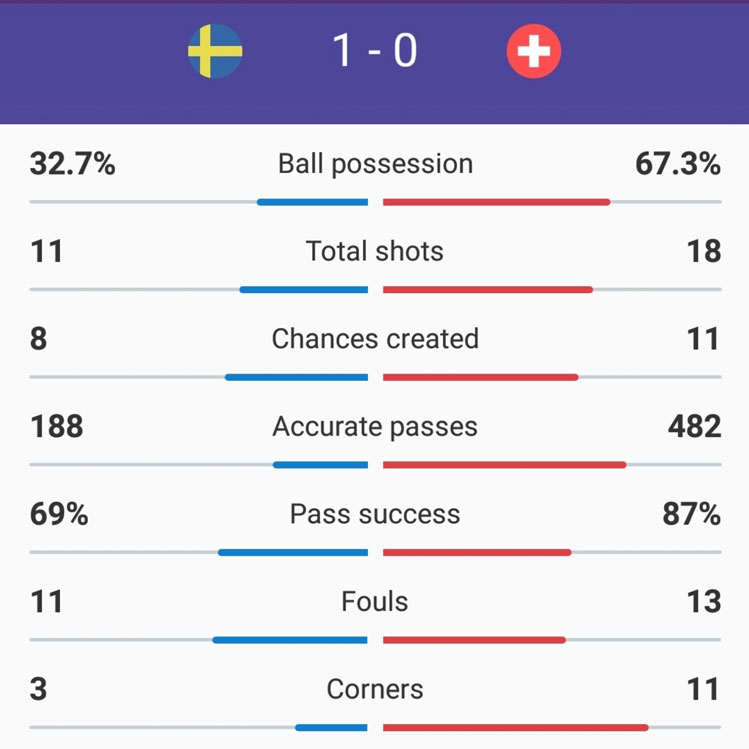 At the other end, Blerim Dzemaili wasted Switzerland’s best chance when he fired over from 12 metres, while Xherdan Shaqiri had a terrible day at the office, sending several diagonal balls from the wing sailing over the heads of his team mates.

The second half started in a similarly stultifying manner, with play bogged down in midfield and both sides looking to be inching inevitably towards extra time and a penalty shootout until Forsberg struck in the 66th minute to inject a flicker of life into the contest. Picking up a pass on the edge of the penalty area, the RB Leipzig midfielder shifted the ball to his right foot and struck a low shot that deflected off Swiss defender Manuel Akanji’s foot and past the wrong-footed keeper.

Switzerland came to life after the goal but Sweden defended stoutly and looked threatening on the counter-attack.

They broke through the Swiss cordon in extra time when the substitute Martin Olsson was released into space and brought down just outside the box.

The referee first awarded a penalty but then changed his mind after consulting the video assistant referee (VAR) to award a free kick, but Sommer saved Ola Toivonen’s effort.