Since he was young, Alli Gecikarana has always found solace in music – using it as a tool to express himself, craftily playing along with his ever-changing notes of sadness, joy, fear and hope. Perhaps it comes as no surprise that his loyalty to the craft led him to successfully embark on music tours across the seas at the age of 16, finally arriving in Cambodia where he decided to settle down and continue playing music at one of the country’s local bars. Khmer Times’ Som Kanika sits with Alli Gecikarana to talk about the journey that led him to the land he now calls home.

KT: Tell me about your musical background? What prompted you to settle down in Cambodia?

Alli Gecikarana: I started playing music on the streets – otherwise known as busking – of Malaysia when I was only 16 years old. After which, I began performing on stages in and out of the country as a band member. Going on tour and holding live performances kept me alive; it spurred me to keep pursuing music.

I came to Cambodia nine years ago – first in [Preah Sihanouk province’s] Sihanoukville city and Koh Rong Island. But I was only there briefly, for two months probably. Two years later, I was invited to join two of my friends who wanted to visit the Angkor Wat temple. After the tour, I went to a bar with my guitar on hand, which I bring with me wherever I go. I found a local bar where they let me play. I was hooked. The way they embraced me as if I were part of their family also helped.

After that, I decided to come back to Cambodia every year. I usually stay in town for only three to four months as I also have gigs outside the country.

KT: What inspired you to become a singer-songwriter? 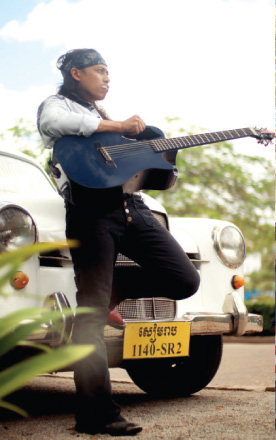 Alli Gecikarana:  I think it came from realising that I have a very different range of vocal and I can’t just copy how the original artists performed their songs a hundred percent. With music references coming from the 60s to 80s era, I play every song I know in my kind of way; being able to deliver such songs the way I want to makes me happy. I also add my own style when I sing my songs.

KT: What type of music do you play, sing and compose? What does music mean to you?

Alli Gecikarana: I play almost every type of music. I always try to learn a new song because it’s like a form of practice for me. I usually do an acoustic version of songs. My voice also blends well with rock songs and island reggae ones. I got hooked with the latter while having a jamming session with a Jamaican reggae artist. Music, for me, is escapism, where I can tell a story through my style and own understanding. I always put myself in the song, so I can tell its story as I mean it.

KT: Can you share some of the interesting experiences you’ve had since performing in Cambodia?

Alli Gecikarana: Other than always playing in different venues, I have been able to meet new people every day and learn a great deal about Khmer culture. I once played a private performance at the ministry, with 12 bodyguards surrounding its officials. Once, I busked at Sihanoukville beach and just blatantly told people that I was just trying to earn enough money to afford me a room for that night. One guy ended up booking a room for me, lasting a month, as long as I play there every day. Good-hearted people are everywhere and there is an abundance of them in Cambodia.

KT: Looking ahead, have you ever thought of collaborating with any Cambodian songwriters or singers?

Alli Gecikarana: Yes, definitely. I am now connecting more with my Khmer friends and also learning a lot of their songs. I will definitely collaborate with them; it’s only a matter of when and how much as we would also need enough budget to record music.

KT: What has been your greatest achievement and challenge since you started your career in Cambodia?

Alli Gecikarana:  I am not sure if I achieved anything here yet in Cambodia, but I will keep on playing music because that’s my only passion. In Malaysia, I was recognised by the Malaysian government itself in 2018 through the Special Busker Wanderer Award because of my knack for travelling and playing music in almost half of the globe.