Kampot pepper, a certified geographical indication (GI) product, and along with other organic and non-GI peppers are now struggling with market’ demand as sales fall drastically.

Much of the spice is being stored in warehouses, leading to around 18 household pepper farmers and producers giving up their farm land, said Kampot Pepper Promotion Association (KPPA) President Nguon Lay.

Lay said the harvest season for Kampot pepper ended in June with a total yield of around 90 tonnes this year. It was 125 tonnes in 2019.

“Starting from 2017, the sales of Kampot pepper was not good because much stock was unsold. Every year, until this month, we have been able to sell up to 70 tonnes, but as of August this year, we have only sold around 40 tonnes of GI-pepper,” Lay said. Kampot pepper comes in three varieties – black, red and white – selling for about $15, $25 and $28 per kilogramme respectively.

Lay added that the Coronavirus pandemic hit GI pepper production and knocked prices down. “Of the total pepper production we are holding in stock, we sell to foreign countries around 60 to 70 percent, while the remaining 30 to 40 percent is sold to tourists in the local market. However, because there are no tourists coming to the country and the some restaurants and hotels have closed, our 30 to 40 percent of sales remain unshifted,” he added.

Lay pointed out that many big companies and big producers have not met any issues because they have fixed markets and can produce enough pepper to meet demand. However, the smallholder farmers and producers have now encountered issues. Therefore, they want to give up because they cannot generate any revenue.

To survive the business during the COVID-19 pandemic, some of the members of the KPPA are selling Kampot pepper at a lower price to Vietnam. 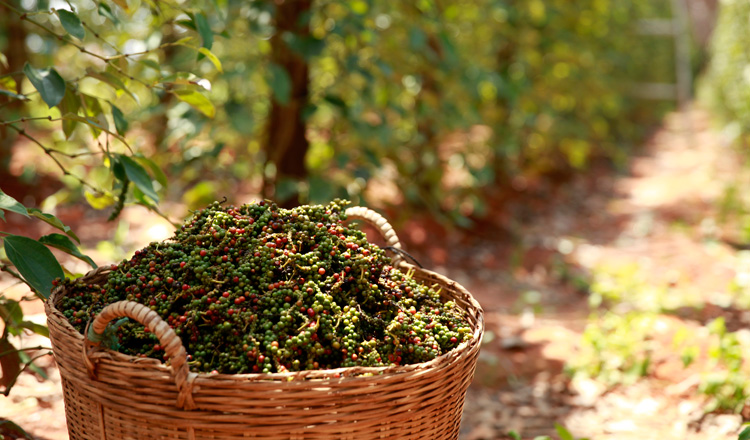 “At present, some farmers are selling the GI pepper to Vietnamese traders. However, they do not brand the pepper as GI pepper because they mix the red, black and white peppers of both low and high quality. They can sell from $1.75 to $2 per kilogramme,” Lay added.  “If we do not do that, we will go bankrupt,” he added.

He said that although officials from the Ministry of Commerce, especially the Kampot provincial commerce department, are trying to seek markets and urge companies to buy  pepper from farmers, it remains an uphill battle.

“My five tonnes of organic pepper is stuck now,” he added. “When there is no market, prices of both GI and organic pepper products and non-GI pepper products decrease. If the price of pepper is $2.5 per kilogramme, we are just breaking even and the revenue only pays for the electricity, water and labour force monthly. Thus, we don’t profit.  We cannot benefit until the pepper price is $3.5 or $5 per kilogramme. A lot of pepper producers and companies in Mondulkiri gave up their businesses because they cannot make any profit if they continue.”

A senior official from the Ministry of Agriculture says it has started listing the prioritised and potential agriculture products for export to China because a soon-to-be-signed Cambodia-China free-trade agreement (FTA) will be implemented by early next year.

“We have an established mechanism to push the export of agriculture products in the Chinese market when a soon-to-be signed Cambodia-China Free Trade Agreement is ratified and implemented early next year,” Chhay added.a