In Phnom Penh alone, around 10 million plastic bags are used on a daily basis, according to United Nations Development Programme. Most of these are used and distributed by different people, from food vendors to clothing retailers, due to their affordability and ubiquitous presence.

In a report by the non-profit organisation, Plastics Ocean International, it was found that over 300 million tonnes of plastic are used every year, half of which is utilised for single-use purposes. The figures are astounding when considering a report by the Our World in Data publication which said that it takes at least 450 years for plastic bottle to decompose.

To safeguard the future of the environment, several people banded together to create the “Sramol Fashion & Creative”, which seeks to use recyclable waste to its limit, effectively reducing waste disposal.

Korn Sokheng, graphic designer and digital marketing officer of Sramol, explained that the group’s name means “shadow” when translated in English. He said this means that the team will always be alongside their followers to help them lead a zero-waste lifestyle. He said this green initiative was created in 2019 with a mere group of six, with them choosing to utilise fashion design as a tool to recreate recyclable waste.

For Sramol, his designs usually revolve on women’s night dresses.

“Everyone in our team has the same passion for fashion design. Although we are not experts, our passion has led us to who we are and what we have today,” Sokheng said, adding that Sramol has first run a fashion show at a Royal Phnom Penh University charity event in 2019.

Sokheng said a goal of the team is to create an impact to society by influencing them to use more recyclables, which are generally sent to the dumpsites. He said by reducing these, it will lessen the amount of waste in dumpsites and help the environment, as well as those who live around the area.

“It is inevitable to use plastic in our daily life. Therefore, the first step is to work on reducing and reusing,” said Sokheng.

“The plastic we use for dress-making is collected from those that are used daily while the rest are sourced from other areas in the city,” he added.

Sramol is not created to make profit. In fact, the money received from the fashion show will be used to support humanitarian activities in the Kingdom.

“So far, we have many people outside the team who are willing to contribute in expanding our activities. From photographers to models, they are happy to help our team grow,” he said.

“Most of the recyclable materials that we use to create dresses are plastic and paper, as we found that doing so could inspire people to follow on our footsteps and learn how to convert waste into useful products. Moreover, wastes like plastic take a long time to decompose. We want the people to be more aware of this,” said Sokheng. “We spend at least two weeks to design a dress as we have to account for brainstorming among team members. Then, we spend a week sewing the dress,” he said.

Due to the cancellation of public events because of the pandemic, Sramol has taken this chance to produce more quality designs which are ready for upcoming stages. Many dresses have been done by the Sramol team to date. In the meantime, the team is preparing for an upcoming show this year. 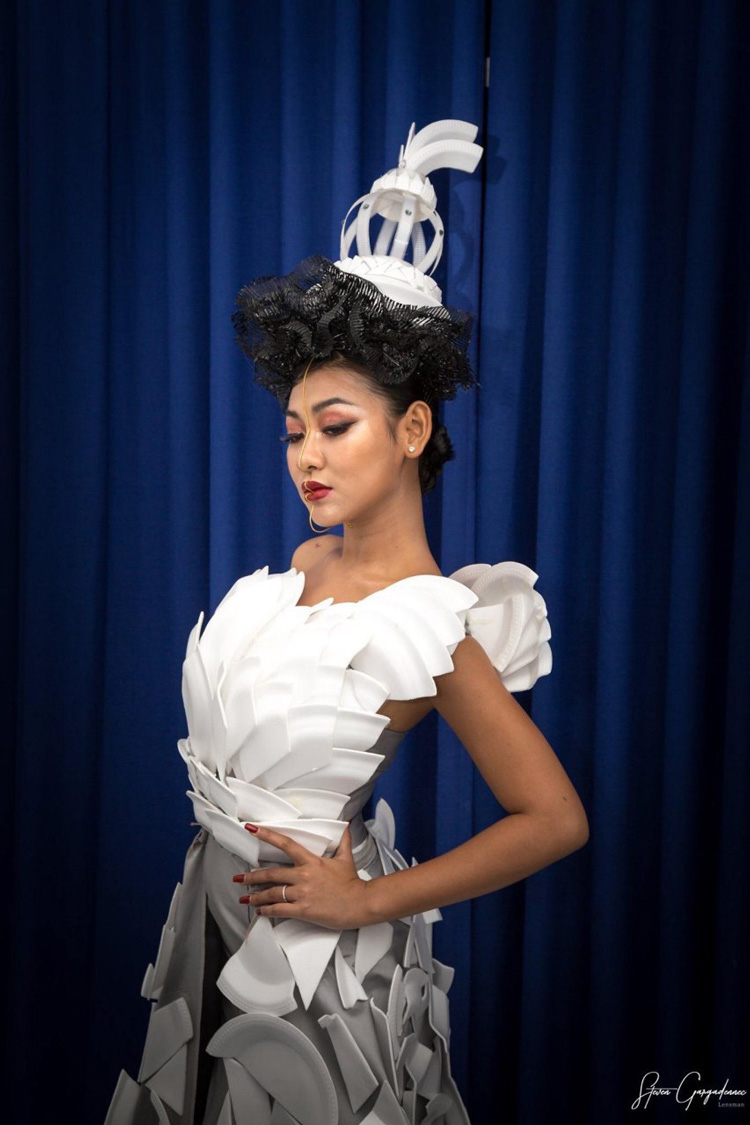 The art of de-stressing