The government yesterday provided rescue equipment and technical training courses worth $1 million to the National Committee for Disaster Management’s (NCDM) Cambodia rescue operation team in a bid to strengthen the capacity of the Kingdom’s rescuers.

Speaking during the handover ceremony held at the capital’s Special Commanding Brigade 911 yesterday, NCDM vice-president Kun Kim said: “Our rescue operation team requires further training as well as sufficient technical equipment to fulfil their duties in the event of natural disasters and accidents, such as the previous collapse of the building in Sihanoukville province.”

The donated equipment includes safety helmets, life jackets, lifeboats, harnesses and search kits. Meanwhile, the technical training programme, which will see the participation of some 100 rescue personnel from  Brigade 70, special parachute brigade 911, ground troops, Commanding Engineers, First Brigade and the Naval Command, will help build their capacities and encourage them to improve their capabilities. 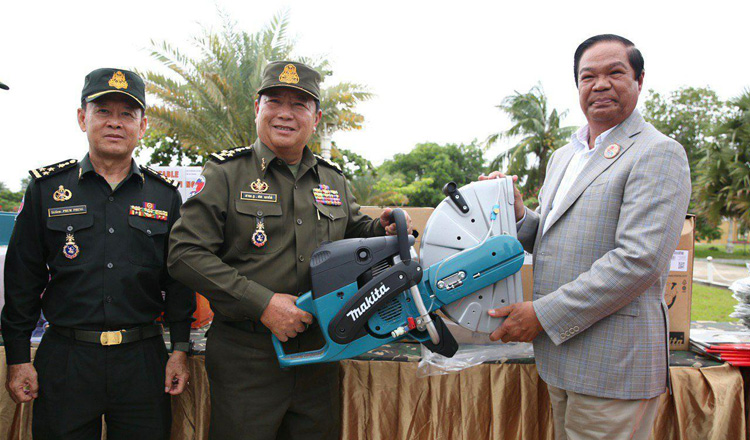 During the ceremony, Naval Officer Ing Ratana, who has been an active participant in disaster relief operations, said saving people’s lives is important and is the main duty of the Kingdom’s rescuers.

Phay Sokoma, an adviser to the NCDM and a trainer for the national rescue team, said: “The team is already experienced in responding to emergency operations. But they still have some shortcomings that need to be fixed and supplemented.”

Issues in past operations include lack of understanding of techniques for risk management, insufficient incident control systems and a shortage of rescue equipment, he said.

In line with the training programme, Mr Kim advised the rescue operation team to stay physically fit and train regularly.

“The fight on the battlefield is one thing; we carry guns. But this is a battle of saving people’s lives. It is even more difficult than the battlefield. Every moment is critical and as long as there are people out there in need of help, we must fight to save them,” he said.