The Ministry of Land Management yesterday handed out land titles to 885 families in Sambok and Chak Krang communes in Kratie province.

A ceremony was held to distribute the land titles under the ministry’s Social Land Concession and Economic Development project in the province.

“The people have already received the land,” Mr Sophara said. “Please take good care of it.”

He added that the land distribution was meant to contribute to the development of Chet Borei district through the promotion of agriculture.

Kao Madilen, head of the provincial land department, said that a total of 3,294 hectares of land was allocated for the project in order to build schools and housing.

“Minister Chea Sophara presided over the distribution of titles to the 885 families so that they could live and use the land,” Mr Madilen said. “They can plant crops and keep the land for the next generation.”

Chhean Ie, a Sambok commune resident, said that he received three hectares of land for housing and farming. Mr Ie said his family was poor and had no land and have been living in the area since 2008.

“There is no happier feeling than receiving a legal land title,” he said. “We would like to express our gratitude to the government for providing land titles.”

However, many in the province still face the issue of being landless.

In March, nearly 200 villagers in a land dispute violently clashed with police in Kratie province, with authorities opening fire. 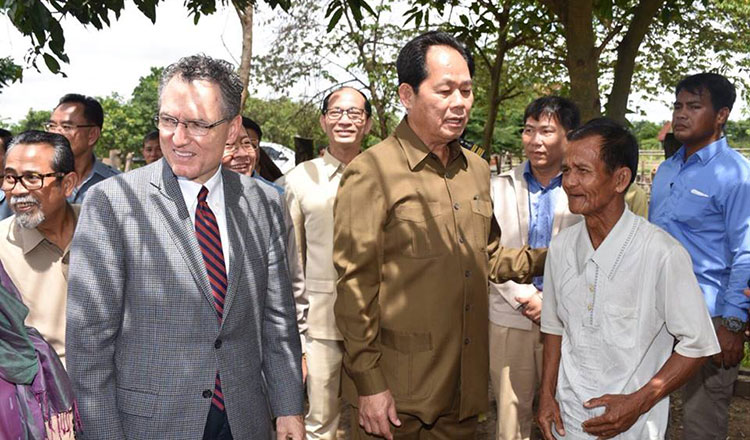 The confrontation began when about 100 officials, including district officials, a court prosecutor and representatives from the Memot Rubber Plantation Company attempted to remove ten huts being built by villagers on company land in Snuol district.

Kong Kimny, Snuol district governor, said at the time that about 200 villagers were blocking National Road 76A when about 100 mixed officials attempted to mark the company’s land to prevent land encroachment.

“They used slingshots and homemade rifles to attack our men, leaving seven injured,” Mr Kimny said. “Then, our officers also shot their guns into the air to scare them away.”