More than 260 kilos of drugs seized

Authorities confiscated more than 260 kilos of drugs in the first six months of this year, according to the National Authority for Combating Drugs.

NACD secretary-general General Meas Vyrith said that from January 1 to July 2, authorities cracked down on 4,014 drug cases and arrested 7,963 people, including 707 women and 135 foreigners from 14 countries.

Gen Vyrith added that the number of cases fell by 14 percent, and arrests were down by 25 percent, compared to the same period last year. He attributed the decreases to the success of the government’s ongoing anti-drug campaign.

As the government marked International Day Against Drugs on June 26, authorities in Stung Treng province managed to seize more than 100 kilos of methamphetamine being smuggled into the country from Laos. 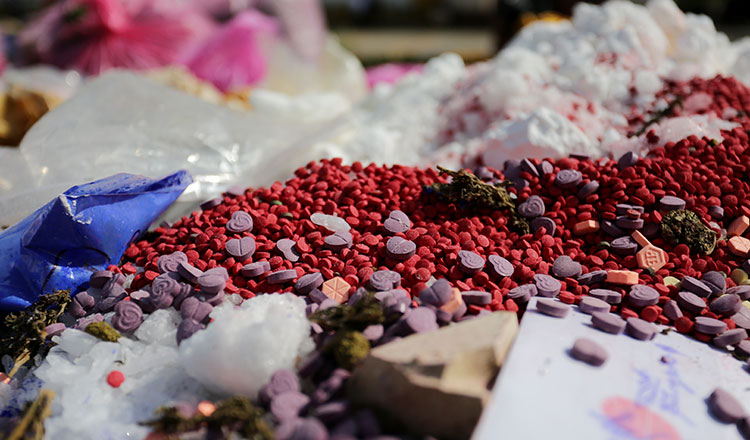 The massive seizure came as authorities in Phnom Penh burned down more than 60 kilos of drugs and about three tonnes of Khat leaves on Koh Pich.​ Deputy prime minister and chairman of NACD Ke Kim Yan said during the buring ceremony that the activities of drug traffickers and users had decreased.

“Drug users have decreased about 12 percent compared with 2016,” Mr Kim Yan said, adding that this was because NACD rewarded law enforcement officers who successfully cracked down on drugs.

Mr Kim Yan added that property confiscated from drug cases were worth more than $1 million.