Royal Cambodian Army Commander Lieutenant General Hun Manet yesterday defended the purchase of nearly 300 military trucks from China, saying the government did not use “a single riel” from the national budget.

A total of 290 military trucks arrived in the Kingdom on a cargo ship from China last week. The vehicles were handed over to the Royal Cambodian Armed Forces’ units and the National Police yesterday.

Speaking during the handover ceremony in Phnom Penh’s Olympic Stadium, Lt Gen Manet who is also RCAF’s deputy commander-in-chief, said the vehicles were purchased to strengthen the armed forces so it can serve the people and the nation’s interests better.

He said the trucks were purchased by the Kingdom through a fundraising effort initiated by Prime Minister Hun Sen. He said the money was donated by Cambodian companies and Cambodian people.

“I wish to clarify that we did not use even a single riel of the national budget, but used money from the fundraising with local charities,” he said. “The initiative by Samdech Decho [Mr Hun Sen] to appeal to generous people to support the army is nothing new. He has been doing this for many years.”

The order to purchase the trucks was made mid last year and they were expected to arrive early this year. They only arrived this month due to COVID-19 pandemic.

Lt Gen Manet also denied reports that the vehicles were donated by the Chinese government. He said China has regularly helped the Kingdom even during the COVID-19 outbreak, including sending medical experts and donating medical supplies, but not the military trucks.

He also expresses his gratitude to Cambodian people for their support for the defence sector, and hit back at those who criticise the truck purchase in the media and social media.

“Other countries spend millions of dollars to modernize their weapons, but when we just have new military trucks, they [critics] started attacking us,” Lt Gen Manet said. “Please be nationalistic.”

He said the trucks will not only be used to serve the defence sector but also to help people during any urgent situation.

“When our territory invaded or during emergencies like social unrest or natural disasters, such as floods, building collapses or the COVID-19 outbreak, we also need the armed forces to intervene,” Lt Gen Manet said. “We need these means of transport to increase our ability and effectiveness to conduct operations.”

He also said the government did not take any money from funds raised to fight the COVID-19 to buy the trucks.

Lt Gen Manet said the government also did not waste any of money raided during the pandemic and instead used it to help people.

He also said military trucks were used to assist migrant workers at the Thai border to return to their home villages.

A day before Thailand closed its border checkpoints with the Kingdom to stem the virus spread in March, it was reported that thousands of Cambodian workers in Thailand flocked to their hometowns during which dozens of the military trucks were used to ferry them home.

During yesterday’s event, Lt Gen Manet also handed over mock keys of the trucks to commanders of army units.

According to RCA’s deputy commander Lieutenant General Suon Khamlor the vehicles will also be used by RCAF units and the National Police.

Lt Gen Khamlor noted that trucks will be provided to other units under the jurisdiction of the RCAF, including military Region One, Region Two, Region Three, Region Four, Region Five and Special Region which has its headquarters in the capital. 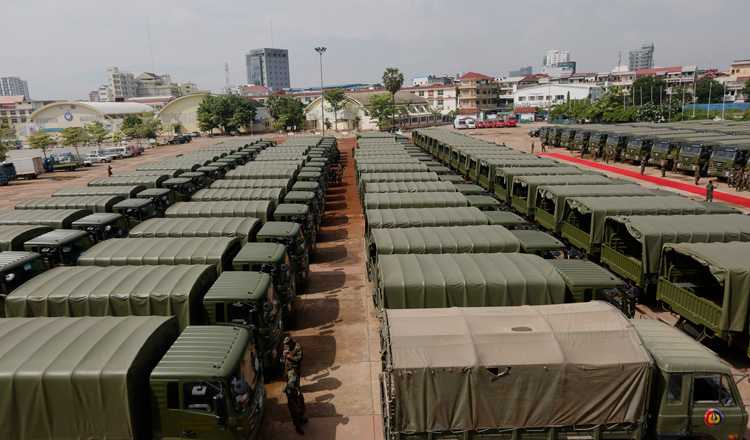 The cost of the military trucks was not revealed.

However, Prime Minister Hun Sen in July last year announced a million-dollar purchase of arms and equipment from China, noting that Cambodia is aiming to modernise its armed forces.

He said that throughout the years, Cambodia has spent $290 million on purchasing weapons from China.

“Frankly speaking, I am now transporting [the weapons] using a ship,” Mr Hun Sen said at that time. “I spent $40 million to buy weapons from China.”

“I want to strengthen the armed forces’ military capabilities. When the shipment has arrived at the Sihanoukville Autonomous Port, I will not be afraid of any criticism,” he added. “Cambodia’s guns are too old, so I ordered hundreds of thousands of new weapons.”

Kin Phea, director-general of the International Relations Institute at the Royal Academy of Cambodia, said yesterday it is a good idea to do a fundraising to support the defence sector.

However, he said it is just a temporary measure and the government cannot depend on fundraising from the public. He said Cambodia needs strengthen its national defence sector.

“It [the fundraising] reflects the participation from the people to support the national defence sectors, but in order make our defence sector strong we need a specific national budget,” he said.