Home - An Artist “in the Right Place”

An Artist “in the Right Place”

Wanting to make artistic objects dealing with personal identity and social relationship, Christopher Bryce Morris has been exploring the world to find a proper place for his creation. The interdisciplinary artist has been to countries, making films and crafting artworks which have been exhibited in museums across the world, but in the past five years, he has found a home in Cambodia. But is it a right place for him? The answer may be discovered in his first solo exhibition in Phnom Penh’s Meta House this week. Story by Taing Rinith.

It is one day before the opening of the first exhibition at Phnom Penh’s Meta House, after over two months of closure due to the coronavirus pandemic. A well-built African American man is hanging nine painting on the wall, getting ready for “his big day” tomorrow. His mustache resembles that of martial arts Michael Jai White, but unlike White, Christopher Bryce Morris is a gentle person whose boundary is limitless.

It is not many here in Cambodia who will be able to relate to his art. Especially those who do not have a clue about contemporary art might be confused by his artwork. One of them shows a portrait that combines what looks like the lower half of his face and the face of a barking German Shepherd, while another painting displays a lady with multiple faces. Most of his paintings depict pictures of people’s body parts blended with different mathematic shapes.

“I’ve always been drawn to the perplexing mathematics of interpersonal relationships,” Chris said, adding he couldn’t help but see everything and everyone as basic shapes.

“I see people like shapes: I am the triangle and my friend is a square and like maybe we fit in some places, but we don’t in others so I started making these pieces kind of as a visual representation of that. In fact, we align ourselves with people that fit our shapes, physically and mentally, so that we can find the right place.”

“Everything in its right place” is the name of his exhibition—his first solo in the Kingdom—which is open to the public on Wednesday this week. But, has this American interdisciplinary artist found his right place in Cambodia?

Born in South Central Los Angeles and captivated by the work of art masters such as Peter Paul Rubens and Caravaggio, Bryce grew up passionate for drawing and painting, but as time went by, he was also drawn in by other forms of media.

During his year at Otis College of Art & Design, he was chosen to be a part of a student group representing the institution in an exhibit entitled “MAKING” at the LA County Museum of Art and won the Jury Prize for his video “The Loneliest Boy in The World” at its 2002 senior show. After graduation, he was working as a designer for a tech company in Seattle, but, that was not a life he wanted and so from there started a life of a wandering artist

“I love travelling and seeing various art around the world,” Chris says. “I am lucky to have been to Italy and many other beautiful countries and seen many masterpieces that inspire my works.”

When Chris arrived in Cambodia five years ago during the water festival, he fell in love with this country, especially its people and this is despite its art scene being still in an infancy stage and the fact he was once denied service at a hotel because he is black.

“The people are friendly and loving, and there are also numerous creative people whom I have been working with,” he says. “There are many emerging artists whose works really impressed me.”

“The country also has a strong creative culture, like the one in Battambang.”

Chris has held two joint exhibitions with Cambodians and other expat artists in Phnom Penh while working as a designer for various employers. Now he embarks on his first solo exhibition. 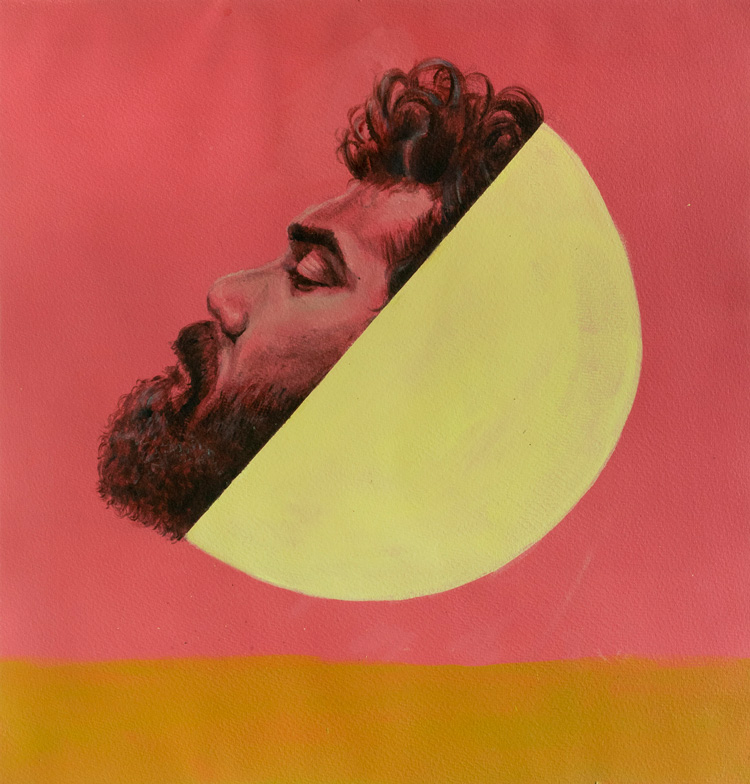 “It’s like it almost never reflects the actual look of the piece,” he says.

“It’s always the idea of ‘I kind of like’ and ‘What is it about my life or other lives’ that I see that I want to interpret in an individual way or an auditory way. Then I kind of spin off on that idea visually and it takes its shape after the pieces” Chris’s exhibition “Everything in its right place” at Meta House is open to the public for one month.

Trendy fruit: four seasonal fruits you should not miss now that they are in season